Characteristics and Function of the Appendix

The appendix is a small organ that's often forgotten and people only think of it when it causes appendicitis. Science has advanced in its study demonstrating its importance in the human body. 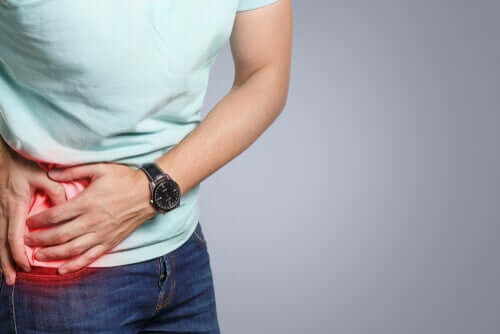 There’s a generalized idea that the appendix is only a remnant of human evolution and that it’s ultimately useless. Indeed, the function of this small organ is still unclear to science. However, there’s a lot of data showing it may not be as useless as we previously thought.

Usually, the appendix isn’t an issue until it causes problems i.e. when it becomes inflamed and appendicitis occurs in particular. We all know a person must undergo surgery to have the organ removed in such cases.

About 8.6% of men will have to undergo appendectomy or removal of the appendix. The figure is slightly lower for women: 6.7%. No one ever thinks they’ll miss this organ, but it isn’t that simple.

This organ is a small thin extension located in the large intestine, at a point called the cecum, which is also near the end of the small intestine. It’s an extension of the ascending colon and between 3 and 5 inches long.

The name appendix is due to its appearance, a flap that looks like a pendulum. It’s kind of like a worm or screw with an entrance but no exit. This is why it can easily accumulate food particles and become inflamed, causing appendicitis.

This organ has always been a mystery to physicians. They started with the idea that it must have a function if it’s there but they couldn’t find it. Thus, we’ve believed for a long time that it was simply a remnant of human evolution, destined to disappear over time.

Read about the Symptoms of Appendicitis in Children

A change of perspective

Despite prevailing ideas, researchers recently discovered that the appendix has evolved 26 times in mammals. That’s to say, it’s changed to better fit into the body over the centuries. This fact didn’t coincide with the idea that it’s useless. Because, if it were, why were there so many adaptations?

Many experts decided to join forces to investigate the reason for this apparent contradiction. That was how the initiative for a study in 2016 sought to establish which were the common factors animals had in common with the appendix. Moreover, they analyzed hundreds of mammals, including humans.

The first conclusion they reached was that the appendix evolved more times than it disappeared. In other words, there were many more animals that maintained this flap and adapted it than those in which it disappeared. This fact led scientists down a surprising path.

New findings regarding the appendix

The researchers also found that there’s a high concentration of lymphatic tissue within the appendix, and it serves as protection for the organism. This led them to hypothesize that the appendix may play an immunological role.

Physiologist Loren Martin of Oklahoma State University noted that the walls of the appendix, especially in children and young adults, contain many lymph cells. This turns that organ into a kind of tonsil of the intestine, similar to the tonsils in the throat, in his opinion.

This means this small flap might be a defensive front against various diseases. Lymph cells might exert immune control.

A study seems to corroborate this hypothesis, at least in part. According to it, people who contracted an infection with Clostridium difficile bacteria were twice as likely to develop a serious condition when they didn’t have an appendix.

The above wasn’t the only conclusion scientists came to. We now suspect the appendix is also an important reservoir and refuge for intestinal microbiota. In fact, this microbiota is key to the immune system, the metabolism, and the proper development of some organs.

It can become altered under various circumstances, such as severe diarrhea. What researchers surmise is the appendix operates as a kind of emergency device if that happens.

This means it helps replenish the lost microorganisms. Apparently, the microbiota takes longer to recover under similar circumstances in those who have undergone an appendectomy. As you can see, it seems that the appendix isn’t as useless as we thought.

Why Do I Experience Stomach Pains?
Do you feel stomach pains? This problem has a few possible origins. On the other hand, it's classified according to intensity and frequency that you feel. Read more »