Changes in Eye Color Can Be Cause for Concern

Changes in eye color can have negative consequences, such as glaucoma or cataracts, depending on the underlying cause. Here's what you need to know. 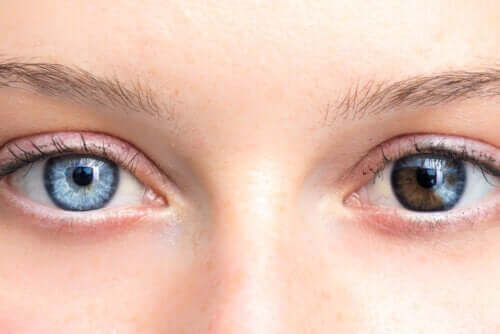 Changes in eye color are a rare phenomenon that would alarm anyone. The eyes are one of the most striking parts of the face, on which we tend to fixate constantly.

It’s true that many people try to modify the color of their irises through contact lenses and other procedures. However, when this happens abruptly and without being intentional, it’s usually due to a pathology. However, in some cases, it can also be something benign.

In any case, it’s essential that you should always consult with a specialist. In this article, we’ll explain what the main causes of changes in eye color are.

When we’re born, the color of our eyes is usually grayish-blue. This doesn’t mean that all people born with that eye color will have it for the rest of their lives. In fact, quite the opposite is usually true.

These changes in eye color are normal during the first few months of life. Babies haven’t yet developed the pigment that gives color to the iris. That’s why, as they get older, their eyes reach their final color.

However, when changes in eye color occur in adulthood, it can be an alarming situation. In many cases, it’s a symptom of an underlying pathology. In the following sections, we’ll list the most frequent causes.

Changes in eye color due to freckles

Before we start talking about changes in eye color, it’s important to explain what melanin is. Melanin is a pigment present in our body, both in the skin and in the eyeballs. It determines the color of the iris and the tone of the skin.

This substance is produced by cells called melanocytes. The fact that these cells are both in the skin and in the eyes explains that freckles or moles can also appear in the eyes. Freckles are known as ocular nevi.

They’re very similar to those of the skin and consist of benign proliferations of the cells that produce melanin. When they appear around the retina, they’re known as choroidal nevi.

As with freckles or skin moles, ocular nevi can appear at any time in life. Therefore, they’re one of the most frequent causes of changes in eye color.

The problem is that, although they’re usually benign, they’re also at risk of becoming malignant. That’s to say, they can turn into melanoma. This is a much more aggressive tumor that increases the probability of affecting vision.

According to a study published in Recent Results in Cancer Research, ocular melanoma is rare. Even so, according to estimates, it affects almost 2000 people each year in the United States.

Lisch nodules are small benign tumors that measure between 1 and 2 millimeters that form in the iris. They show up as lumps that generally don’t affect vision.

According to an article that appeared in the Mexican Journal of Ophthalmology, they’re the most frequent ophthalmological manifestation of neurofibromatosis. This is a disease of genetic origin that consists of the formation of tumors from nervous tissue.

They can appear anywhere, from the peripheral nerves, the spinal cord, or even in the brain. Although in most cases they’re benign, they cause symptoms and carry a risk of becoming malignant.

The diagnosis of this disease usually takes place during childhood. Like intraocular nevi, Lisch nodules damage vision and cause changes in eye color.

You may be interested in: What Your Eye Color Says About You

Fuchs’ dystrophy is a rare disease. So much so that, according to the Orphanet platform, its prevalence is 1 to 9 persons per million inhabitants. It affects young adults and causes changes in eye color.

What happens is that one eye changes color becoming lighter than the other. The cause is unknown, although the Journal of the Colombian Society of Ophthalmology points out that it may have to do with the herpes simplex virus, rubella, or herpes zoster.

The problem is that this pathology usually causes symptoms, like floaters. These are small spots that appear in the visual field and simulate floating flies. In addition, it can lead to cataracts and glaucoma.

In addition, this migration of cells alters the normal circulation of the liquid inside the eye. When they accumulate, the pressure inside the globe increases, giving rise to glaucoma. The most frequent symptoms are blurred vision, changes in eye color, and even pain.

Normally, the pigment that gives color to the irises is located at the back of the iris. In some people, the iris has a different morphology and rubs against other parts of the eye. This gradually releases the pigment, which then spreads to other areas where it shouldn’t be.

When this happens, something similar to what we mentioned in the previous section can happen. The pigment can obstruct the circulation of intraocular fluid. Therefore, it’s possible that glaucoma may occur. In addition, there are also changes in eye color.

Eye trauma is capable of changing the color of the eyes by depositing blood in areas where it shouldn’t be.

Changes in eye color from trauma

Trauma is another of the most common causes of changes in eye color. It can be a penetrating injury, a blunt blow to the face, or any agent that damages the eye’s blood vessels.

This type of injury usually alters vision, causing it to double or decrease visual quality. In addition, sensitivity to light is common. The accumulation of extravasated blood in parts of the eye where it shouldn’t be is the explanation for the phenomenon.

Changes in eye color are cause for consultation

All changes in eye color should be examined by an ophthalmologist, since, as we’ve seen, they can be a symptom of a disease. In addition, there’s a risk of permanent vision damage.

Therefore, when in doubt about anything concerning this disorder, it’s essential to consult a specialist. The eyes are a very delicate part of the body that require special care and consideration.