Just as with our skin, our eyes can also have spots, moles, and even freckles. These are scientifically known as ocular nevi. They're normal most of the time but you must keep an eye on them (if you'll pardon the pun). 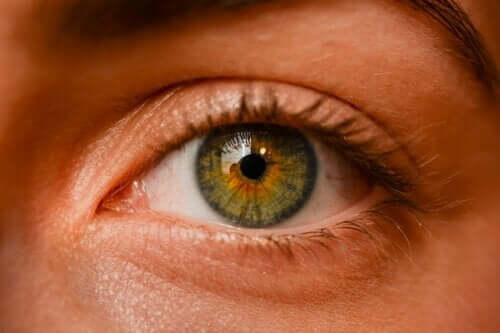 Ocular nevi are mainly known as eye freckles. These mole-like spots form on the inside of the eye, and their shape and color are similar to those we get on the skin.

It’s a benign condition that occurs in 6% of white people, among whom it’s more frequent. Furthermore, it’s also more common among newborns and people under the age of 20. However, the risk of malignant transformation is low, less than 1%.

No doubt these spots might lead you to think they’re malignant. So today we’ll explain what you should know about ocular nevi and their possible complications.

What are eye freckles?

The ocular nevus is a benign pigmented tumor that sometimes appears in the eye. In addition, it forms on the front of the eye – on the white part in a layer called the conjunctiva.

Ocular nevi form by an abnormal and non-uniform grouping of cells called melanocytes. Melanocytes are in charge of producing a pigment called melanin, which gives color to the skin, hair, and eyes.

Regarding their shape, they can be flat or slightly elevated and seldom exceed 1/25 inches. The appearance is very similar to that of a mole on the skin and it’s usually a congenital condition — that is, we’re either born with it or it appears during our youth.

These moles are also produced by excess exposure to unprotected sunlight. For this reason, they’re more common in people with fair skin.

This article might interest you Ocular Migraines: How Can They Affect You?

In general, ocular nevi are asymptomatic. A medical consultation is often motivated by observing an injury or by a slight feeling of irritation. Also, you must know that the presence of a small dark spot inside the eye doesn’t have to mean there’s a disease behind it.

As with moles, the ocular nevi seldom lead to symptoms or complications; for the most part, they’re merely a personal sign. It’s the same as any other freckle you may have on your skin.

People often confuse them with colored formations that, in many cases, are normal parts of the eyeball. This is because the layer that covers the eye might be too thin, and the normal anatomy, transparent.

When to consult a professional

1% of ocular nevi can present mutations in their melanocytes, transforming into melanomas over time. Melanoma is a malignant tumor and its main characteristic is the ability to spread.

It may be too late to act in the face of poor surveillance of a given injury. Therefore, surveillance and supervision of all our brands are important, both on skin and eyes. Thus, consult your doctor in the presence of an eye spot that:

You may be interested in Seven Possible Causes of Ocular Tics

Signs an eye freckle could be malignant

In general, an ocular nevus isn’t malignant but you might want to consult your doctor if you notice any abnormalities. This is because a benign spot could definitely become malignant. Thus, these are the most common signs:

How to treat eye freckles

Fortunately, most nevi don’t require treatment since they neither affect vision nor are problematic for health. That is, you don’t need to do anything if the mole is benign. At least according to the American Academy of Ophthalmology.

But if the spot changes and grows into malignant melanoma, it might require surgical removal as long as the location and size allow it. In addition, radiation therapy is a common part of this treatment.

Finally, the ocular nevus doesn’t usually endanger our health, but we must be aware of them and their characteristics and keep them under check. That way you’ll know when to consult your doctor in the event of any change.

Retinoblastoma: Symptoms, Causes and Treatment
Retinoblastoma is a type of cancer that affects the eye. It's associated to a gene mutation, and up to 40% of cases are hereditary. Read more »
Link copied!
Interesting Articles
Illnesses
Eczema and Stress: How Are They Related?