What Are The Causes of Kidney Stones?

There are many different symptoms of kidney stones, and in this article we'll tell you what they are and how to identify them. 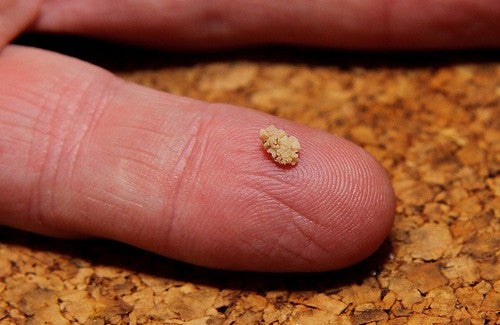 It’s a good idea to know the causes of kidney stones, as well as their symptoms, effects, and possible treatments for eliminating them. Also, if you don’t treat them in time, they could cause irreversible damage and possible recurrence.

Incidentally, there are different types of calculi. That’s why you’ll need an analysis on them in order to be able to eradicate them and to build a healthy life so they don’t come back.

Around 5% of women and 10% of men suffer from kidney stones over the course of their life, in the United States.  This painful illness represents a loss of $2 billion a year, and it happens when urine contains an amount of specific substances in it. Small crystals then form, which turn into calculi. It can takes weeks or months to acquire consistency and to form.

People that don’t drink enough liquids also have a higher risks of suffering from them. However, they are more likely to develop if you produce less than one liter of urine a day, which is equivalent to roughly one quarter gallon.

Kidney stones can be eliminated from the body, however, without causing permanent effects. They are painful and have the ability to come back if you don’t find and establish treatment. If a long time goes by between the formation of the stones and treatment, it could cause consequences in the kidney, along with other adverse effects.

Doctor Glenn Preminger, director of the Comprehensive Kidney Stone Center at Duke, and professor of Urology Surgery at the University of Duke, stated that: “There is no doubt that kidney stones are related to obesity”.  The doctor also participated as co-author in the Journal of Urology for similar findings in a study.

It is quite common for kidney stones not to show any symptoms during their formation. They can even move down the ducts called ureters, which are then transported to the bladder by the urine. That’s how, when they show up, the stones could block and threaten the passage of urine from the kidneys.

This illness can bring a lot of diverse symptoms. The primary is intestinal pain that begins sporadically and suddenly, and ends just the same way. So there are two types of pain that one can experience. The first is on one side of the back or in the abdominal region.  The second type of pain could possibly extend to the testicles (testicular pain) or to the groin (groin pain).

Other symptoms could be:

The different types of kidney stones

You should keep in mind that there are different causes of kidney stones and types of stones.

Other substances can also form kidney stones, like medications such as indinavir, aciclovir, and triamterene.

Kidney stone treatment should begin with a special diet. After the doctor confirms which type of stones you have and does different tests to determine this, you could begin a more specific diet, necessary for diminishing and removing them. A nutritionist or dietitian can give you the new diet, even though it’s likely that in any diet they would change the amount of potassium, salt, liquid, protein, oxalate and calcium that you consume.

One way of avoiding them and dissolving them is to drink between 6 and 8 glasses of water a day.  The pain, however, could be quite extreme, potentially requiring narcotic analgesics. Also, if this pain is unbearable, the individual can be hospitalized with intravenous fluids.

Along with this, specific treatment depends on the type of stone formed, and the symptoms produced. If they are small, the stones tend to leave on their own and, if they leave the body, you must save the urine so as to analyze the stone and prevent future problems.

Depending on the type of stone, there are a few medications that the doctor can give you to prevent their formation, or to stimulate their decomposition by eliminating the material causing them. Some of the following medications are a few possibilities:

If surgery is necessary, the stones must have the following characteristics:

Read more: 7 Homemade Remedies to Get Rid of Kidney Stones

If you keep in mind this specific advice, like a simple change in diet, you could prevent kidney stones. Also, if you already suffer from them, you must take precautions to avoid future complications or recurrences.

6 Tips to Eliminate Kidney Stones
Kidney stones are hard deposits that are formed from salt, minerals, and other residue building up in urine. They can be as small as a tiny grain of sand or a lot bigger, which cause obstructions in your urinary tract and severe medical conditions. Read more »
Link copied!
Interesting Articles
Illnesses
Swimmer's Itch: Causes, Symptoms and Treatment