Causes and Prevention of Nipple Chafing

Nipple chafing can lead to infection, in addition to pain and bleeding. This is why it's important to prevent it and treat it properly. Continue reading to find out how! 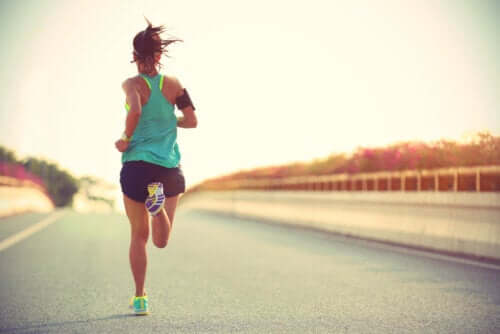 Nipple chafing is a common injury in runners due to continuous clothing rubbing during physical activity.

It’s more prevalent in men, although it also afflicts some women and children. The problem is it can be quite annoying considering the nipple is a sensitive area. Unfortunately, it can worsen and even lead to infection.

What exactly is nipple chafing?

Nipple chafing is an injury of this area due to rubbing against clothing, mostly during running. It’s bilateral in most cases and consists of small cracks in both nipples.

It usually occurs in people who run frequently or who do marathons. As you know, the nipple slightly protrudes in men and is obviously further in women. This makes it easy for friction with clothing to happen when running, whether you’re wearing a T-shirt or a bra.

Thus, the fabric of the clothing is one of the most important triggers. For instance, nylon is commonly associated with a chafed nipple. Other factors, such as temperature, also play a role in its appearance. This is because the nipple tends to be more erect when it’s cold and leads to friction.

In contrast, it’s a lot more common in women around their menstrual cycle. This is because the breasts tend to swell and be more sensitive around this period of time.

A study published in Anais Brasileiros de Dermatologia explains that almost 35% of people who run over 38 miles a week experience nipple chafing. However, the incidence was less than 5% in those who ran less than 18 miles a week.

As per an article published in the Revista Médica de Chile, the main characteristics of a chafed nipple are painful injuries. As we mentioned at the beginning, these are usually bilateral and could even lead to bleeding.

This same study indicates that athletes, in general, are more exposed to certain infections. This is because moisture, sweat, and other factors on these wounds facilitate the proliferation of bacteria.

Furthermore, the injury is similar to dermatitis. At first, there’s redness and discomfort in the area. Unfortunately, the skin will worsen if you continue running while there’s friction, leading to further wounds.

This is precisely why the main symptoms are pain, redness, and bleeding. The nipples, the breast itself, are more sensitive than other parts of the body. Thus, it could lead to lichenification of the skin in some cases. What this means is the skin thickens after continuous friction or scratching.

You can prevent nipple chaffing with the simple measures we’re about to describe. These are mainly about protecting the nipples while you exercise.

The fabric of the clothes you use for exercise is important, especially for runners. This is because some materials increase friction or don’t allow perspiration.

For example, nylon jerseys are more likely to chafe a nipple. So they should, ideally, be smooth and have no seams or adornments that might rub on the chest. Also, the fabric should be breathable and cool.

Most women tend to wear sports bras during exercise. This is why it’s essential to select the right fabric that’ll be in direct contact with the nipple.

Opt for a well-fitting bra that provides enough support so the breast doesn’t move too much with each stride. The fabric, as we explained above, must be breathable and not susceptible to friction.

It should have no seams in the central area of the chest either. Similarly, the size should be appropriate and the bra straps should be wide. This keeps them from getting too tight.

We already explained that a chafed nipple is more frequent in people who run long distances. Thus, it’s unusual for it to afflict anyone who runs less than 6 miles unless it is the result of faulty fabric.

Therefore, professionals advise sticking to short jogging sessions until this injury heals. However, if you just can’t give it up then you must properly protect this area of your body.

Use lubricants or petroleum jelly

Certain products can prevent rubbing and thus prevent nipple damage. Applying petroleum jelly to the area works for many people. It’s a substance that helps lubricate and protect the skin.

Also, talcum powder can reduce this problem as it helps dry the area which in turn lessens the irritation. Many people actually use it to prevent chafing in other areas — such as the inner thighs.

Prevent nipple chafing when you run

In addition to the substances explained above, there are other ways to protect the nipples while you exercise. For instance, there’s such a thing as a nipple shield in the market, it’s a kind of strip that adapts to your anatomical shape.

You can make these at home though, just be sure they don’t come off more with sweat or due to chest hair.

Do you know The Difference between Jogging and Running

Consult a doctor if you experience nipple chafing as it could easily worsen due to infection. You might require an antibiotic but should only take one as directed by a professional.

Also, it is essential that you properly clean this area. Ideally, dry your nipples entirely after washing and apply moisturizing creams or petroleum jelly again. Always use clean clothes to reduce the risk of infection.

Exercise and sports
Types of Creatine: Properties and Uses

Today, most people around the world exercise, either as a hobby or professionally. That’s why many products have been created…

The tips you should know if you like to run are related to training, proper running form, mental strength for…