Biliary Lithiasis, or Gallstones, and Nutrition

Nutrition plays a very important role in the recovery of patients with gallstones. That's why it's important to know what to eat and what to avoid in your diet. Here are some recommendations. 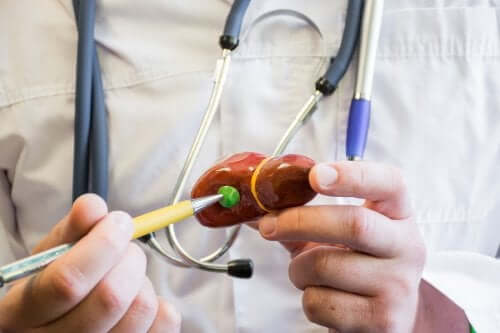 Biliary lithiasis, also called cholestasis, is one of the most frequent pathologies of the digestive system. It’s also defined as the presence of stones in the gallbladder or in the ducts, which can cause obstructive problems. Surprisingly, the size of gallstones can vary from the size of a grain of sand to the size of a golf ball!

Most cases of gallstones are asymptomatic, meaning that there aren’t any obvious symptoms to alert to the problem. And, in symptomatic cases, biliary colic is the main symptom, although an episode of acute cholecystitis may appear. Keep reading to learn more!

Acute cholecystitis is the main complication of gallstones. It’s characterized by inflammation of the gallbladder along with other discomforts such as abdominal pain, nausea, vomiting, and restlessness. There are two types of stones associated with this pathology:

What can cause gallstones?

Although it isn’t yet clear why gallstones form, there are a number of factors that contribute to the formation of gallstones. It’s a pathology that occurs in both sexes, although it has greater prevalence in women.

In cholesterol lithiasis the main causes of stone formation are the result of:

On the other hand, in pigmentary lithiasis the formation mechanism is complex. It occurs due to an increase in the bilirubin content in the bile. Moreover, this is shown in a study published in 2020.

You may be interested in: Are You Really Eating Enough Fiber?

The general recommendation for people with gallstones should be as follows:

In any case, a healthy diet with high vegetable content has been shown to be associated with a lower incidence of these pathologies.

In people with biliary lithiasis, correct nutrition plays a fundamental role, since it facilitates the recovery process, favoring the rest of the gallbladder and facilitating digestive functions. Moreover, it helps prevent complications associated with this disease.

In other words, the gallbladder diet can undeniably help prevent the acute symptoms of biliary colic and relieve digestive discomforts such as gas and dyspepsia. In the case of inflammation (cholecystitis), fasting is advisable, provided that the physician indicates it.

Don’t miss out: Home Remedies for Gastritis in Children

As a matter of fact, there’s evidence that the fatty acids of the omega 3 series contribute to exert a protective role with renal activity especially in pathologies that have an inflammatory process.

So, do you have gallstones? Then consider these recommendations to support your treatment through diet. Be sure to follow your doctor’s recommendations and suggested treatments. In conclusion, visit your doctor and follow our recommendations on what to eat and what to avoid in order to solve that discomfort as soon as possible!

Can You Fight Gallstones Naturally?
The gallbladder is a small organ located under the liver, just in the upper right part of the abdomen. Are there ways to fight gallstones naturally? Read more »
Link copied!
Interesting Articles
Nutrition
Symptoms and Causes of Hyperpotassemia