A Bacteria that Causes Pain, Bloating, and Diarrhea

For patients with H. pylori, doctors recommend a healthy diet, low in salt, spices, and fats. 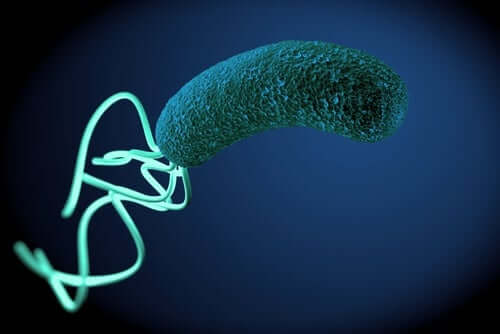 Helicobacter pylori are pathogens that can cause serious stomach problems. Among the primary symptoms are bloating and diarrhea, pain, and a burning sensation in the abdomen, upper abdominal discomfort, and nausea, among others.

This bacteria is the most common cause of gastritis and gastroduodenal ulcers (peptic ulcers), according to the MSD Manual.

It was first discovered and described in 1983 and caught public attention due to its aggressiveness upon infecting healthy patients.

Spread by contact, H. Pylori immediately sets itself up in the stomach lining or duodenum, causing major problems.

In situations where hygienic methods are not always adequate. This is because it’s easier for these bacteria to spread and affect people.

While it’s true that the incidence of infection is higher in these conditions, no one is safe from becoming ill and suffering from pain, bloating, and diarrhea. So, if someone doesn’t treat your illness properly, it could lead to chronic gastritis or dangerous ulcers.

To date, doctors and scientists aren’t sure what causes these bacteria to spread into our bodies. However, they have some good information on relevant factors:

Symptoms of H. pylori infection such as bloating and diarrhea

As we mentioned above, these bacteria often don’t present any symptoms or signs of discomfort at all.

If you want to know for sure whether this organism is inside you, you should consult your doctor. Furthermore, they’ll be able to conduct appropriate tests.

These tests consist of analyzing the patient’s breath after ingesting a liquid that contains a non-radioactive isotope. Therefore, if the bacteria are present in the body, it’ll convert the liquid into carbon dioxide and ammonia.

The carbon dioxide passes into the blood and then the lungs excrete it. So, it’s here that your physician can detect it in the breath.

If you already suffer from digestive problems, your doctor may suggest an endoscopy to examine the lining of your stomach.

However, if this bacteria is present inside of you, certain problems are more likely to occur after age 40. These may give you a clue as to its presence:

If you have questions about what you should be eating during your recovery, talk to your doctor.

Coconut Water Kefir Recipe to Improve Your Health
Although kefir can also be prepared with commercial coconut water, we recommend getting the water directly from coconuts to obtain the maximum benefits. Read more »
Link copied!
Interesting Articles
Illnesses
Risk Factors for Mouth Cancer