Are You Eating Less but Gaining Weight?

It may seem incredible, but it's true: You're eating less but are gaining weight. How can this happen? What are you doing wrong? We'll try to answer these questions in today's article. 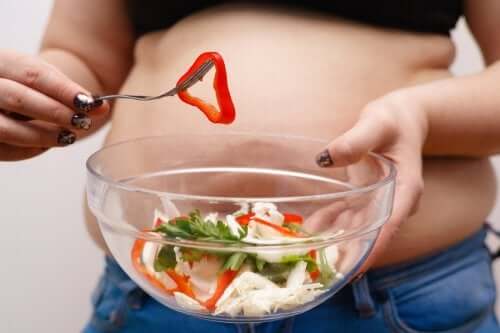 We all know people who eat a lot and are thin, just like we know people who eat less but are still gaining weight. The mystery lies in why the latter have difficulties maintaining their optimal weight. After all, it’s hard because they often experience feelings of failure and even guilt for not being able to lose weight, despite eating less.

The weight loss formula is practically universal. It’s based on the first law of thermodynamics and is actually quite simple. We lose weight when we expend more energy than we take in. This is scientifically proven and many people lose weight when they follow this principle. However, as with everything, this mathematical equation on its own won’t lead to good results because bodyweight has genetic, environmental, food, and psychological dimensions.

So, when trying to lose weight, you must take all of these into account.

Are you eating less but gaining weight?

The foundation for maintaining energy balance is rooted in two concepts:

However, other factors come into play such as:

Ok, but what about people who are gaining weight even when they’re eating less? What in the world are they doing wrong?

Keep reading to find out.

Are you eating less but gaining weight?

The role of your metabolism

Our body loves balance in every sense. It has its own mechanisms to balance its pH, temperature, blood pressure and, of course, weight. When it detects an important caloric restriction with its consequent weight loss, it’s alarm bells go on. Thus, it goes into calorie-saving mode – completely against our will. So, a series of hormonal reactions activate to save energy. This happens automatically.

One of the first things that happen is there’s a decrease in the basal metabolism and the feeling of satiety. In turn, the hormones associated with hunger increase. As you can see, basal metabolism is of great importance in the total calories we consume throughout the day. So, in this case, we expend less even when we eat less and the weight just stagnates. In fact, it even increases in some cases.

Find out more: Creating A Balanced Diet for Losing Weight

So, eating less is a way to lose weight because we ingest fewer calories. However, as we mentioned above, we can’t just decrease our intake of calories uncontrollably, because then our metabolism becomes slower. Apart from having the opposite effect at the metabolic level, low-calorie diets lead to a lack of nutrients and energy. Thus, they can lead us to a state of apathy, decay, and even bad mood.

So, it’s more important to spend more energy instead of decreasing the calories we ingest. Physical exercise and daily activity are essential for maintaining a healthy metabolism, modulating the regulation of hormones positively, increasing muscle mass, and decreasing fat mass.

The importance of muscle mass

Our muscles are one of the body systems that most consume energy, even when we’re doing nothing. A person with a higher percentage of muscle mass will have a higher basal metabolism than a person with a lower muscle percentage. So, our muscle mass is usually affected as soon as we begin to restrict nutrients. For instance, the body will look for other sources of glucose when the body lacks what the food provides.

You may not know it, but one of the main reserves of glucose we have is body fat and muscle mass. And it’s precisely the latter that we use primarily when there’s a caloric restriction. The result is a loss of muscle mass that further decreases our energy expenditure.

At this point, we must reduce the amount of food we eat and it comes with the negative consequences we mentioned above. So, the reason why some people gain weight even if they eat little is that they’re burning so little it makes it difficult to eat less.

Paradoxically, sometimes eating less is not synonymous with losing weight. So the best thing you can do is put yourself in the hands of a professional and adopt healthy lifestyle habits that’ll allow you to lose weight and maintain a healthy new weight.

The Most Common Mistakes that Keep You from Losing Weight
What's keeping you from losing weight? There are various reasons why we may decide it's time to lose it, but the most common one is wanting to be healthier. Read more »
Link copied!
Interesting Articles
Nutrition
Symptoms and Causes of Hyperpotassemia