Red cabbage is a food of high nutritional quality that, when added to a healthy diet, can help promote wellness. Why is it recommended? What do you need to know about it? Find out below! 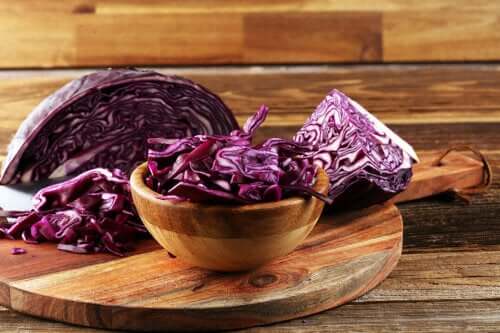 Red cabbage, also called purple cabbage or Blaukraut, is very common in stores during the winter. It’s originally from the Mediterranean area and it has been cultivated since 2,500 B.C. It belongs to the Brassica group of plants, which includes other nutrient-rich vegetables such as broccoli, Brussels sprouts, and kale.

There is a difference between red and white cabbage. This difference is that the red kind has anthocyanin, a pigment from the flavonoid family. It also has powerful antioxidants. So, you’re still not including this food in your diet? So, here are 11 reasons to start eating it on a regular basis.

The first reason to eat more purple cabbage is its high nutritional value. Although it’s very low in calories, it provides doses of vitamins and minerals that benefit health. Specifically, as detailed by the Food and Nutrition Information Center (USDA), each 89-gram serving provides:

It also provides small amounts of other nutrients such as iron, calcium, magnesium, phosphorus, copper, and zinc.

Eating purple cabbage promotes eye health. This is because of the large amount of zeaxanthin and lutein it contains. Furthermore, as detailed in a literature review published in Archives of Biochemistry and Biophysics, these two elements are natural solar protectors that prevent UV rays from getting to your retina.

Try out these Natural Treatments for Uric Acid and Gout

3. It improves your digestion

Because of its content of dietary fiber and antioxidant compounds, red cabbage has shown favorable effects on intestinal health. In fact, a study published in the IOSR Journal of Dental and Medical Sciences found that cabbage has beneficial effects in the treatment of peptic ulcers.

4. It improves your heart health

As already mentioned, red cabbage is an important source of anthocyanins. In addition, these antioxidant substances have shown positive effects in protecting the heart.

As research published in Advances in Nutrition points out, anthocyanins lower the risk of cardiovascular disease, including hypertension, heart attack, and stroke.

5. It reduces your levels of unhealthy cholesterol

Another one of the benefits of eating red cabbage is that it reduces your unhealthy cholesterol and inflammatory cytokines thanks to its antioxidant, vitamin, and mineral content.

Although more evidence is needed, a study published in the Journal of Agricultural and Food Chemistry found that anthocyanin-rich red cabbage extract (ARCE) has a protective role against induced hypercholesterolemia and cardiac and hepatic oxidative stress.

6. It strengthens your immune system

The nutrients contained in this food are useful to stimulate the immune system and, thus, increase defenses. Furthermore, according to research published in the International Journal of Molecular Sciences, this variety of cabbage helps fight inflammation and improves immune responses.

7. It keeps your skin healthy

Red cabbage juice contains high levels of antioxidants and phytochemicals, as well as vitamins C, E, and A, which help keep the skin hydrated, soft, and supple. In addition, according to information in Biomolecules & Therapeutics, its anthocyanins play a photoprotective role.

The anti-inflammatory properties of red cabbage have been widely studied and are believed to help prevent and treat several chronic diseases. For example, a test tube study, published in Molecular Nutrition & Food Research, using an artificial model of the human intestine found that this type of cabbage helps decrease intestinal inflammation by 22 to 40%.

9. It may help soothe breast engorgement

Although to date there are no fully conclusive results, and the evidence remains limited, it’s believed that the application of cabbage leaves to the breasts may help calm the symptoms of breast engorgement.

A publication in the JBI Library of Systematic Reviews suggests that cabbage leaf treatment used in women with breast engorgement may contribute to soothing the pain and hardness of swollen breasts. In addition, it may increase the duration of lactation.

Eat these Thirty Foods Rich in Flavonoids to Fight Anxiety

Red cabbage, and specifically its anthocyanins, have been linked to benefits in blood glucose control and diabetes prevention. A study published in the journal Nutrients concluded that dietary anthocyanins have a modulating effect on insulin resistance and, in addition, have the potential to modulate disease states such as diabetes.

Thanks to its Vitamin K content, the cabbage family is known for being a great help for keeping your bones strong. However, more research is needed, there’s evidence to support the role of vitamin K on bone health.

As you can see, red cabbage has great health benefits. It’s nutritious and can contribute to the prevention of several health problems, in addition to bringing some variety to your meals.

However, you should be aware that it isn’t a “superfood” or a miracle cure. It’s simply a good source of food that, added to a healthy diet, helps satiate your appetite and be healthier. So, you should try it with some delicious boiled potatoes and a drizzle of olive oil!

7 Medicinal Plants that May Help Improve Your Bone Health
Drinking certain teas on a regular basis is a great way to improve your bone health. Learn more about what you can do for healthy bones in this article! Read more »
Link copied!
Interesting Articles
Nutrition
The Optavia Diet: An Option That's Not Right For Everybody