Why Do Women Experience More Gas During Menstruation?

The hormonal changes that occur during a woman's period lead to certain changes in the body. That's why many experience more gas during menstruation, as well as digestive problems. 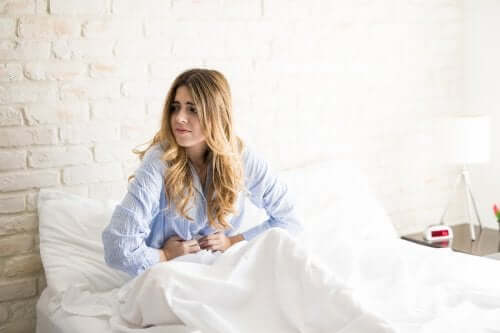 In principle, it may not seem possible that women tend to experience more gas during menstruation. However, the truth is that there’s a connection between one process and the other – even though the digestive system and the reproductive system are independent of each other.

For many women, excess gas during menstruation is a common symptom. In fact, this occurs in at least two-thirds of the female population. Also, those who already have a history of digestive problems suffer more severely from this situation.

So far, no exact and detailed explanation has been found as to why this phenomenon occurs. However, we know that the hormonal ups and downs brought about by the menstrual cycle end up affecting the gastrointestinal processes.

Let’s look at this in more detail.

The origin of gas

It’s normal to have gas and to pass it, even though there’s a certain social taboo and it causes embarrassment in some people. In fact, it’s completely natural for a person to pass gas between 6 and 20 times a day. What’s more, it’s also normal to burp three or four times after eating.

Gas is produced in the intestine or stomach as food is broken down in the body. Some foods produce more gas than others. Likewise, in some people, gas is more frequent than in others, without this implying any type of condition.

In addition to some foods, food intolerances, or the intake of certain medications, menstruation also gives rise to a greater amount of gas. This is due to changes in hormone levels in the body. That’s why it’s also a frequent situation during menopause.

You may be interested in: What Should You Avoid During Your Period?

During menstruation, large hormonal changes occur in the body. This often affects the digestive system. That’s why it’s normal during the menstrual cycle for these types of problems occur:

Experts aren’t exactly sure of the reason behind increased gas during menstruation. However, according to available data, up to one-third of women who normally don’t have digestive difficulties have problems with gas during their period.

It’s a fact that progesterone reaches a peak days before a woman’s period begins. As we pointed out, this is what in principle affects the normal functioning of digestion. Sometimes there’s diarrhea, constipation, both, or generalized discomfort called “intestinal stress”.

In this regard, one of the studies carried out indicates that there’s a relationship between digestive problems and substances called prostaglandins. These act as hormones and are largely responsible for so-called menstrual cramps.

Discover: What Should You Avoid During Your Period?

More information regarding gas during menstruation

Some foods are especially irritating during a woman’s period, particularly dairy products. It’s important to remember that these don’t only include milk, but all its derivatives. For example, cheese, butter, yogurt, and all processed foods that include milk in their composition.

Coffee usually causes similar effects. Both coffee and dairy products have an even more powerful effect on those women who’ve previously had a gastrointestinal problem. In fact, those who suffer from irritable bowel syndrome have a greater amount of gas and more severe symptoms during menstruation.

Why You Feel Pain During Menstruation
Doctors generally offer no solution to pain during menstruation other than taking anti-inflammatory or birth control pills. Read how to treat it naturally! Read more »
Link copied!
Interesting Articles
Anatomy and physiology
The Causes of Stained Teeth