When Would You Need to Take Iron Supplements?

Iron supplements help increase iron deposits in the body. But who should take them and what should they expect from them? Continue reading to find out. 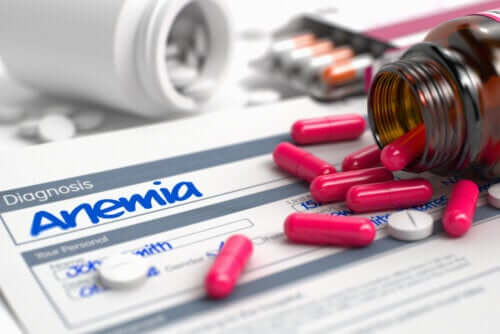 Iron supplements are ideal for people whose diets don’t supply this mineral. Who really needs them, though? Isn’t it something you must consume frequently?

Iron is essential for the formation of hemoglobin and red blood cells. Thus, a deficiency could lead to complications. Continue reading to find out more about this.

The body has a hard time carrying oxygen to the tissues when the iron levels in the blood drop. It’s for this reason that the main symptoms of this deficiency are weakness, fatigue, headache, paleness, and coldness in the hands and feel. Thus, these manifestations may indicate the presence of anemia.

Notice that the work capacity and motor activity of the body decrease as a consequence of this deficit. All of this alters the immune system and thus the risk of sickness increases. Also, low levels of this mineral have an impact on the lack of mobilization of vitamin A in the liver.

Read about Anemia and Iron Deficiency: Are They the Same?

When to take iron supplements?

Fortunately, iron supplements can prevent or treat these complications once they’ve set in. They should be a part of a well-balanced diet for better results.

According to several studies, some population groups have increased requirements for this mineral. It can be a consequence of poor diet or stages of human development associated with anemia such as:

Pregnant women need more iron for themselves and their babies. There’s an increased risk of anemia if the iron deficiency during pregnancy is serious. Also if the child has a low birth weight, was born prematurely, or had a low red blood cell count early on.

The World Health Organization states that more than 40% of pregnant women in the world have anemia. This might indicate that half of this population is iron deficient.

Thus, pregnant women and breastfeeding women should consult their doctor about the ideal supplement to prevent this problem. They may prescribe it in the form of drops or tablets. Severe cases will require the injection form, especially if the pregnant woman experiences uncontrollable vomiting.

Iron deficiency can cause delays in psychological development, social isolation, and a decreased ability to pay attention. Also, infants born at term may develop a deficiency if the mother doesn’t include adequate amounts of food that contains this mineral in their diet.

Some women of reproductive age are prone to deficiencies in this nutrient. In general, this is due to heavy menstrual bleeding. Thus, their loss of iron is greater than in other people.

In addition, adolescents have increased requirements due to their developmental status, which is exacerbated by heavy periods. Metrorrhagia in young women who start their periods is a common cause of anemia.

These individuals are prone to iron deficiency but can prevent it by respecting the optimal time frame between one donation and the next.

Anemia due to chronic disease

According to several studies, chronic diseases such as rheumatoid arthritis, inflammatory bowel disease, gastrointestinal disorders, and certain types of cancer can interfere with the body’s ability to absorb and use iron. This is why people with these conditions are often deficient.

Iron supplements are available in the form of capsules, tablets, chewable, and liquids. Ferrous sulfate is the most common one but there are other chemical forms such as gluconate and fumarate.

It’s important to keep in mind that these are better absorbed when taken on an empty stomach. However, their ingestion can lead to stomach cramps, nausea, and diarrhea. So, ingest them along with a small amount of food to prevent these problems.

In addition, calcium and antacids interfere with their absorption so you must wait at least two hours before ingesting milk, cheese, raw vegetables, caffeine, and other drugs. Conversely, the types of food containing vitamin C, such as citruses and kiwi may promote more efficient iron absorption.

Routine blood testing is recommended to be certain of an iron deficiency. This method determines the exact red blood cell count and hemoglobin values. It’s also possible to measure the concentrations of iron in the blood and its transport proteins if required.

Should you take iron supplements?

These drugs are an effective strategy for increasing body reserves but their use isn’t appropriate for everyone. Keep in mind that the ingestion of any substance not prescribed by a doctor is contraindicated, as excess also leads to complications.

In addition, it’s best to follow a well-balanced diet high in iron. Keep in mind that supplements aren’t magic, nor do they represent the only strategy against anemia. Similarly, the decrease in red blood cells isn’t always due to a lack of iron.