A relationship is never the same after either people have an affair and there are many reasons to try to be understanding. However, there are many instances in which the offended person isn't capable of forgiving infidelity. 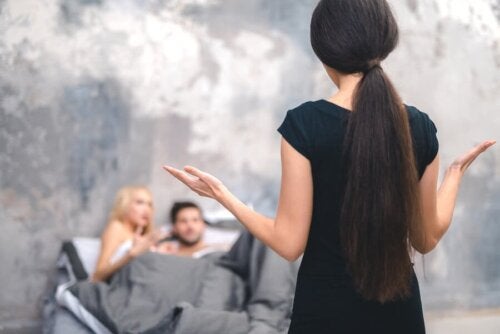 An extramarital affair violates trust, ends complicity and commitment, meddles in intimacy, brings suffering, and is a betrayal of trust. So, when a person cheats, it’s normal for their significant other to be incapable of forgiving infidelity.

Indeed, having broken the foundations of a relationship, it’s logical to consider whether it’s worth continuing it or not. It’s often better to put an end to it and today’s article will provide you with five examples of when it’s best to do so.

There are many reasons why a person might be unfaithful. However, the result is often the same: cheating makes a huge dent in a relationship. This is because infidelity is a form of betrayal, almost an “attack” against the foundations of commitment and mutual trust.

So, a deceived person often finds themselves in a dilemma of whether or not they should forgive the offense and try to maintain the relationship. They don’t realize they’re not under any obligation to continue it after infidelity. It’s up to them to make an important decision after weighing the pros and cons of both options. It’s perfectly legitimate to say “it’s over.”

Oftentimes, a person who’s been unfaithful asks for forgiveness and pretends to continue it as if nothing ever happened. However, some things can’t be repaired. Trust is gone. As per historian Nicolae Lorga’s words, “you can only lose someone’s trust once.”

As you can see, there are many reasons to end a relationship after infidelity. Here are five of them.

Promiscuity and sex without protection can be really dangerous. Indeed, many sexually transmitted diseases such as syphilis, gonorrhea, HIV, or genital herpes can easily spread from one person to another.

Thus, you must take into account that a person who’s been unfaithful hasn’t only betrayed you emotionally but also hasn’t taken into account your health and personal integrity. That is, their immaturity has been greater than their need to care for and protect the other person with whom they have a commitment.

Also, if you’re not sure your partner is going to change and you think they’ll continue to have affairs in the future, then you must keep the following in mind: your health is the most important thing.

We recommend you read: Should You Save Your Relationship by Ignoring Infidelity?

Many people tend to blame themselves when their significant other cheats. Similarly, some people try to make their partners responsible for their unfaithfulness by telling them things such as “our sex life is not the same as it was, we’ve fallen into a routine,” etc.

In any case, blaming others for our actions is a form of manipulation and a way to not have to assume the consequences of a selfish personal choice. Nobody is at fault for their partner’s unfaithful behavior.

Another consequence of infidelity is that it’s a blow to the deceived person’s self-esteem. This is why they often feel guilty about it. So, keep in mind that forgiving infidelity means having to live with that wound, recover from it, and learn to see things clearly.

The wound may wake you up and you’ll be able to understand the pain isn’t worth it. You’ll only feel undervalued when it’s in fact your partner’s selfishness and immaturity that are to blame. Thus, if you feel guilty about their actions, then it’s better to put an end to the relationship and give yourself some time to process it.

Trust is broken after infidelity

We already mentioned that trust is one of the fundamental pillars of a relationship. Infidelity breaks and destroys it, undermining what you built over time with dedication and effort. You may not be aware of it but relationships don’t just happen out of the blue, you build them.

In this respect, infidelity is about contempt for everything you’ve built together for so long. Cheaters don’t take it into account as apparently it wasn’t important enough not to lose it due to a momentary whim.

So, how can you trust a person who’s let you down by being unfaithful? Trust is difficult to regain once it’s lost. Infidelity will always be a lurking shadow.

We recommend you read: Is Infidelity Different for Men and Women?

As you know, it’s one thing to forgive and quite another one to forget. Furthermore, events as painful as infidelity can rarely be erased from one’s memory. This is precisely one of the reasons why regaining confidence is so complicated.

Keep in mind you’ll never be able to forget infidelity. It’ll always be in the back of your mind and arise, along with the discomfort, pain, injury, and anger you felt when you found out. You know that the relationship will never be the same.

Most cheaters are likely to be repeat offenders. At least according to sexologist Tracey Cox. In her book Hot Relationships: How to Have One, she says that a cheater is always a cheater.
Also, unfaithful people often promise they won’t do it again but these are empty words for the most part. Once mistrust has invaded a relationship, the second blow will be even harder on the pride, dignity, and self-esteem of the deceived person.
As you’ve seen, it’s very difficult for a relationship and the people who compose it to be the same after infidelity. Also, the deceived person may not be able to regain confidence in the other and they don’t have to do so.
Therefore, when considering whether you should forgive infidelity or not, keep in mind you didn’t do anything wrong. Above all, you must recover and give yourself time to do so. Because what really hurts is to have trusted someone who’s immature, selfish, and disrespectful.
Should You Save Your Relationship by Ignoring Infidelity?
Betrayal can break even the strongest of bonds, but when it comes to love, forgiveness opens new ways and make the relationship come out stronger. This begs the question: Should you save your relationship by ignoring infidelity? Read more »
Link copied!
Interesting Articles
Breakups and divorce
How to Stop Obsessing Over Your Ex

Physical exercise and sport
Plogging: Exercising while Caring for the Environment