Micro-infidelities are the subtle actions or behaviours of your partner. What are they exactly? How do they do them? Discover everything here. 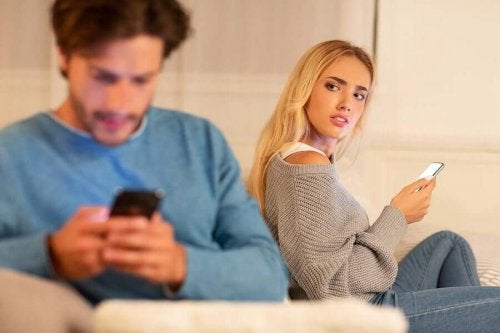 Social media and other apps have created another type of cheating: micro-infidelities. This concept was made up by psychologist Melanie Schilling, who wrote in The Daily Mail that she needed to give a name to a new type of behavior in couples.

Micro-infidelities are small actions you have with another person outside your own relationship. What are they exactly? Why do they happen? Below, we’ll dive a little deeper into this topic.

According to the psychologist, some examples are:

You may be interested in: The 7 Types of Infidelity that You Should Know About

Although some might believe that these are traits of controlling people, or that they’re jealous, the psychologist emphasizes that the difference between naivety and micro-infidelity is that the latter is hidden from your partner.

You can decide if there is a micro-infidelity by answering the following question: Why does it happen?

Some experts believe that with new technologies also come new infidelities. Among them are:

We can evaluate characteristics of new infidelities to find out if we’re surrounded by micro-infidelities:

However, before identifying any of these clues, you need to clarify the limits of the relationship.

Know: 4 Signs Your Partner is Emotionally Cheating on You

The relationship needs to have clear rules

As soon as two people become a couple, they need to draw up clear limits for their relationship. By doing this, each person will be able to control their actions, or, at least, they’ll know what will upset the other person emotionally. Rules will also allow you to understand the attitudes and actions that can jeopardize the relationship.

Among the reasons why micro-infidelities happen is the feeling of emotional conquest. Similarly, people cheat because they like the way it feels to be attractive to others.

You need to find out if the person who micro-cheated wants to pursue their new “relationship”. If so, you can class it as infidelity.

What often begins as an unassuming game of crossing the line, ends up becoming infidelity and, subsequently, the relationship breaks down.

For this reason, it’s important to determine if the romantic “games” will really end there, or if they’ll become something else outside the virtual environment, capable of affecting the original relationship.