What's sex after a hysterectomy like? This is one of those questions women often ask themselves when in that situation. In addition to relieving symptoms, you can recover your ability to feel pleasure and you might even increase it. Continue reading to find out more about it. 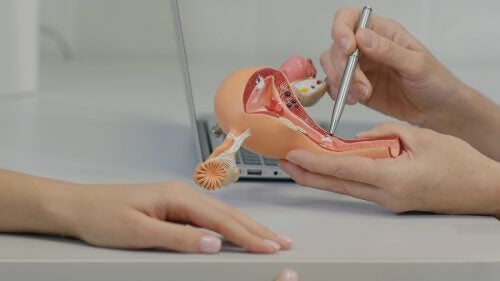 Sex after a hysterectomy is a matter of frequent concern to couples, both physically and psychologically, given the consequences of this type of surgery.

However, intimate encounters don’t have to end as the female quality of life improves. On the contrary, women usually recover and are able to enjoy themselves even more than before. As you can see, your sex life isn’t over after a hysterectomy.

A hysterectomy is a surgical procedure in which a surgeon removes either the full uterus or just part of it. In some cases, they also remove the ovaries and/or the Fallopian tubes.

Depending on the organs affected, the physical sequelae could vary. Some of the most notable are:

The removal of such an important part of the reproductive system can also have a psychological impact on a woman. This is because this type of forced early infertility might damage their self-esteem and lead to depression. These feelings are more pronounced during childbearing age.

Recent research, such as the longitudinal study developed by a group of scientists from the University of Queensland, Australia, provides evidence in this direction. Thus, we shouldn’t underestimate the psychological impact of surgery on women.

It’s true there are physical and psychological consequences that affect a woman’s sex life after this kind of procedure. However, don’t consider it the end of eroticism. Any woman can resume her sex life and get pleasure from it after the intervention.

Of course, both the help and understanding of her lover as well as the advice of a specialist will be essential to overcome any difficulties during her recovery.

Let’s now look at some of these situations.

A woman can have sex after about six to eight weeks after surgery. However, some of them might experience pain.

The reasons why it occurs are often dryness and also due to the shortening of the vagina, which depends on the applied hysterectomy method.

Given this problem, you can resort to the use of lubricants as an alternative that facilitates contact. But keep in mind that sex is much more than penetration.

So, this is the time to focus on other aspects to enjoy and experience new sensations. That is, it’s an opportunity to explore other forms of pleasure until pleasurable penetration is viable.

Read on: The Symptoms and Treatment of Perimenopause

Some women report decreased relationship satisfaction after a hysterectomy. But, in the absence of the uterus, this is the time to explore other ways to reach an orgasm.

For example, the direct stimulation of the clitoris will definitely lead to a woman’s climax and she’ll immensely enjoy her sexual encounters.

As you can see, it’s time to reinforce foreplay to strengthen the personal bond. This is the time to explore one another’s erogenous zones and explore other ways to enjoy sex.

You may be interested: How is Ovarian Cancer Detected?

Another consequence of hysterectomy is the decrease in libido. The good news is some pharmacological treatments can help balance any hormonal alterations and increase it.

There’s still more research to be done in order to prove the benefits of this type of therapy, but the results are positive, for the most part. At least according to a clinical trial led by the team of Shalender Bhasin from the School of Medicine at Boston University.

Some thoughts on sex after a hysterectomy

Your intimate encounters don’t have to end with the removal of your uterus or other organs; it merely enters a new stage.

What’s more, it might even lead to a more active and enjoyable sex life. Mainly because you no longer have to worry about certain diseases such as cancer, previous bleeding problems, or even pain.

This is a time to discover and experience different forms of pleasure.

Finally, keep in mind that you might need medical help and psychological counseling in order to overcome any possible discomfort and difficulties.