The Symptoms and Treatment of Perimenopause

Perimenopause doesn't have to be a problematic stage in a woman's life. It refers to the transition period between fertility and the definitive end of the menstrual cycle. In this article, we'll tell you about the symptoms and treatment of perimenopause. 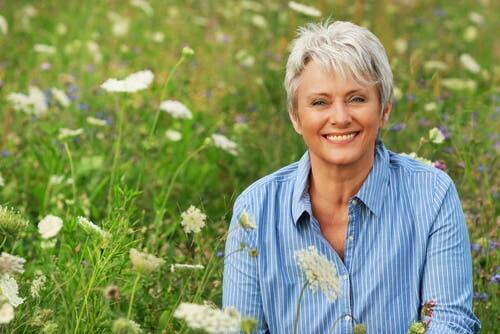 Perimenopause is a word that means “around menopause”. It has to do with the transition period that leads up to menopause, which marks the end of a woman’s reproductive life. It’s also known as the menopausal transition. However, since the age at which a woman will enter this phase varies greatly, it’s important to know the symptoms and treatment of perimenopause.

As we just mentioned, the period of perimenopause takes place at different ages. While some women start to experience their first symptoms around the age of 30, others experience it during their 40s. In fact, in some women, the first signs of perimenopause don’t appear until they’re in their 50s.

Understanding the symptoms and treatment of perimenopause is fundamental. That way, women can recognize when they are in this stage, as well as how to manage their symptoms.

Before discussing the symptoms and treatment of menopause, we should take a moment to clearly define just what it is. In general, the term perimenopause refers to the reproductive phase closest to menopause. It starts when a woman’s hormone levels start to decrease and it ends when a woman’s menstruation ceases for more than 12 consecutive months.

During this stage, estrogen and progesterone levels become unstable, dropping, and rising constantly. This produces a series of symptoms that are both physical and psychological. Such instability continues until menstruation finally ceases. However, a woman’s menstrual cycle isn’t considered finished until a woman goes an entire year without her period.

Some factors can precipitate the appearance of perimenopause. Experts estimate that women who smoke enter perimenopause one or two years before average. At the same time, family history, some cancer treatments, and having a hysterectomy may cause women to experience premenopause earlier than usual.

Keep reading: How To Take Care of Yourself During Menopause

The symptoms of perimenopause

The main symptom of perimenopause is an irregularity in a woman’s menstrual cycle. The period may be shorter or longer, or they may simply disappear for a month or more. In the same way, some periods may be more abundant and others may be lighter.

Other symptoms of this stage are the following:

Scientists aren’t sure exactly what causes heat clashes, but there are certain factors that that increase their frequency. For example, hot water, hot or spicy foods, alcohol, and caffeine.

Mood swings are the result of hormonal instability. However, they also have to do with the unconscious awareness that a person is aging and approaching the end of her fertility. They may also be more severe due to stress.

Discover more: How to Control Osteoporosis During Menopause

The treatment of perimenopause

Perimenopause doesn’t require treatment if the symptoms are tolerable. However, if that’s not the case, then it’s normal for women to resort to one or several of the following treatments:

Other advice for the perimenopausal period

Many women can handle the symptoms of perimenopause through measures that don’t involve pharmaceutical treatments. A healthy lifestyle helps considerably when it comes to reducing discomfort and stabilizing mood.

Basically, this means eating healthy and exercising regularly. It’s also a good idea to incorporate the habit of meditation. Some breathing exercises are very effective in the control of heat flashes without needing to resort to pharmaceutical drugs.

Acupuncture, as well as consuming certain herbal infusions, have also demonstrated effectiveness in these cases. What’s more, there are natural products that can also be helpful in the treatment of perimenopause. Whatever the case, women should consult with a doctor before using any of these procedures or alternative treatments.

Hot Flashes in Menopause: What to Do about Them
The vast majority of women experience hot flashes in menopause. This is probably due to the hormonal changes characteristic of this stage. Read on! Read more »