What to Do When Your Kids Don't Want to Eat

Mealtimes should be a pleasant time with your family, but if your kids don't want to eat, they can be very unpleasant. You have to be careful to make sure they aren't losing weight. 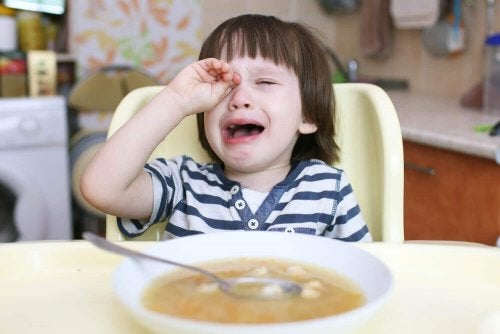 A lot of parents get concerned when their kids don’t want to eat. Generally, there’s nothing to worry about, because this is usually a stage that they’ll overcome later in life. However, if the pediatrician says it’s necessary, you may need to help your child gain weight.

As a baby, your child will grow rapidly, so it’s common for babies to eat a lot of food.

However, between the ages of 2 and 5, the infantile appetite appears. This stage can even last until they’re 6 or 7 years old. When it comes to meal time, the child probably refuses to eat the food and says s/he doesn’t like it. As a result, the parents may try forcing the child, may offer treats or may try punishing him.

That’s when mealtime becomes a battle.

The start of complementary feeding is an awakening of flavors for the baby’s palate. At first, s/he will just drink milk. As the child grows, s/he’ll begin to eat solid foods and will be eager to try more and eat more. She or he will probably love to eat. As children grow, though, they often lose that desire to eat.

After their first year of life, several factors will start to impact children’s desire to eat. Their growth rate will slow down and they’ll become full faster. In addition, their interest in the world around them will make them put food on the back burner.

As children grow, they’ll start to only prefer a few foods in small quantities. As a parent, you’ll probably start to worry. Parents are constantly asking their pediatricians questions about food, and they’ll even turn to internet forums because their children don’t want to eat.

When parents are concerned about their child’s nutrition, they may force them to eat more food than they actually need. Other parents may insist that their children eat everything, regardless of their taste preferences.

However, the real issue with a child not eating is when his/her weight is affected.

Read this article: 13 Foods That Will Improve Your Children’s Concentration

When Kids Don’t Want to Eat

Additionally, there may also be a natural cause for your child’s lack of appetite. A chronic illness, a flu-like illness or an acute infection will make your child refuse to eat. This will only last for a short period, however, and once they feel better, they’ll have a better appetite.

The real issue is when children are hungry but they only try to satisfy that hunger by eating foods that are appetizing to them. Of course, parents play a key role in resolving this issue.

If the parents’ concern creates a tense environment at mealtimes, the child’s negative attitude towards food will only get worse. Additionally, if the child only wants to eat the food s/he likes, and the parents give in to him or her, it will set a negative expectation.

The child will then refuse to eat regular foods because s/he knows that when s/he feels hungry, his/her parents will give him or whatever s/he wants. If this conflict continues, the child’s health can be affected.

As a result, a doctor may tell you that s/he needs help gaining weight.

How to Help a Child Gain Weight the Healthy Way

Children learn to eat the amount of food they need to feel full. If they’re healthy, happy children who are growing at the right pace, you shouldn’t worry too much about the percentile they’re at on growth charts.

Parents should only worry about creating a pleasant environment at mealtimes and about giving their kids a healthy diet. However, if they start to lose a lot of weight, a pediatrician may tell you they need to gain weight.

Below, we’ll give you some basic recommendations to help with nutrition and to get your child to eat, if this is your case:

Remember, it’s not just about gaining weight. Excessive consumption of sugary foods that are chemically processed and high in trans fats shouldn’t be used to help your child gain weight. Childhood obesity is a serious problem that you should avoid at all costs.

In addition, mealtime should be a pleasant time for the whole family. This positive relationship will influence your child’s appetite and make it better. Actually, that goes for everyone – regardless of age!

When the child associates eating with something nice, they’ll have an easier time overcoming their lack of appetite. If your child doesn’t eat well, your pediatrician may recommend giving her or him vitamins or food supplements to promote healthy weight gain.

Two Diets for Children with Obesity
Childhood obesity is a worldwide problem that can lead to diseases during adulthood. We'll suggest healthy diets for chidlren with obesity. Read more »
Link copied!
Interesting Articles
Children
8 Crafts to Decorate a Children's Party

Self-confidence is an extremely important aspect of our mental health. Without it, you may feel on edge in new or…

Recipes
How to Make Melon Jam

Diet
What Are Pseudocereals and What Are the Benefits?

Pseudocereals are plants that people have been cultivating for years. This grain is actually a flower seed. Wheras typical cereals and…

Medication
Benefits and Side Effects of Isotretinoin for Acne