What to Do if Your Partner Is Verbally Abusive

Putting you down, insulting you, or saying something that humiliates hurts as much as a punch. What can you do if your partner is verbally abusive? 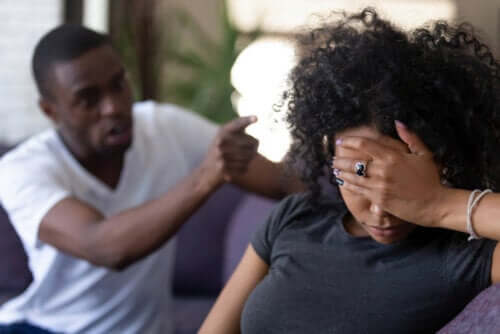 The more attached you are to someone, the more their words will affect you. So much so that, at times, certain expressions or comments can hurt you. In addition, many people complain about having a verbally abusive partner who doesn’t respect them. Many feel stuck, as they don’t know what to do.

How should you act in such situations? Firstly, it’s important not to allow this type of dynamic to become a habit. You can’t ignore the fact that aggressive or violent communication is a form of abuse. The consequence of enduring months (or years) of frequent insults or harassment has a serious psychological impact.

The progression of abuse

On the other hand, the behavior that consists of the use of harmful or aggressive words can appear progressively in relationships. It’s common for these words to be considered jokes, sarcastic comments, or sharp phrases that are camouflaged with irony at first. They’re usually accompanied by laughter and an “I was only joking, dear”.

However, this behavior becomes more common over time, eroding the sufferer’s self-image, until the words become blows to their self-esteem and dignity.

My partner is verbally abusive: the abuse that you’re reluctant to acknowledge

You have to remember something very important: in a relationship, love isn’t enough. This is because some types of love hurt and some people love badly.

In fact, good communication is essential to enjoy a satisfactory, happy, and lasting relationship. Being able to reach agreements and having an emotional connection are, in many cases, the keys to success.

Now, since some people don’t always know how to find the right person, we advise you to be aware of who deserves your time, effort, and affection and who doesn’t. For example, some people aren’t fully aware that contempt is a form of abuse.

Moreover, others don’t want to accept that their partner is verbally abusive, which means that they’re likely in an abusive relationship. Below, discover more characteristics.

What are the signs of verbal abuse?

As scientific studies, such as this one conducted at Case Western Reserve University in Cleveland, United States, reveal that between 50 and 80% of people have been victims of emotional abuse. Verbal abuse and being talked down to are recurring characteristics. Verbal abuse manifests with the following signs:

What to do if your partner is verbally abusive

Research papers, such as this one from the Department of Psychology of the University of Georgia in the United States, show that good communication guarantees relationship satisfaction. Now, as we mentioned above, apart from affection and good communication, you need to pay attention to other factors, such as emotional ones.

Thus, if your partner is verbally abusive, it’s essential not to let them get away with it. Also, you need to connect with your self-esteem and emotional balance. Abuse will eventually just lead to pain, discomfort, and unhappiness. How should you act in these situations?

It’s a good idea to discover what makes your partner communicate in this inappropriate way. Are they going through a hard time? Do they not know how to handle anxiety and stress?

Sometimes, factors such as work problems or unresolved personal trauma lie behind the aggressiveness. It’s important to know what’s behind their behavior. However, sometimes, it may not be due to a specific situation or emotion. In fact, your partner may have a personality style that’s used to this behavior.

Assertive attitude: what I expect from you and what I can’t allow

When your partner’s verbally abusive, you can’t just sweep it under the rug. If you don’t respond to it or act accordingly, the abuse will continue and even worsen. Therefore, you need to be assertive and very clear about things.

You must indicate exactly what word, expression, comment, or conversation hurt you. Ask your partner not to behave this way again. Also, you should give them examples of what you expect: respect, understanding, empathy, complicity, being heard, and being able to reach agreements.

Make a decision if your partner is verbally abusive

Unkind words hurt as much as a punch or a wound. Aggressive communication is psychological abuse. Therefore, you can’t, and shouldn’t, tolerate it. If your partner doesn’t change their attitude and continues to be verbally abusive, then you must make a decision.

Breaking up with them will safeguard your self-esteem and dignity. Don’t tolerate the intolerable. Real love doesn’t hurt and, above all, communicates with respect through a healthy emotional connection. Keep this in mind!

How to Identify Verbal Abuse and Act
Nobody has the right to insult, disparage, or denigrate another human being. Effectively, interpersonal relations should be based on respect. For this reason, if verbal abuse happens, you should limit it or report the situation. Read more »
Link copied!
Interesting Articles
Relationships
Serial Monogamy: Jumping from One Relationship to Another