What Is Nasal Mucus and What Does It Do?

Nasal mucus is a sign that the body is working properly. These viscous and sticky substances play an important role in protection and defense. 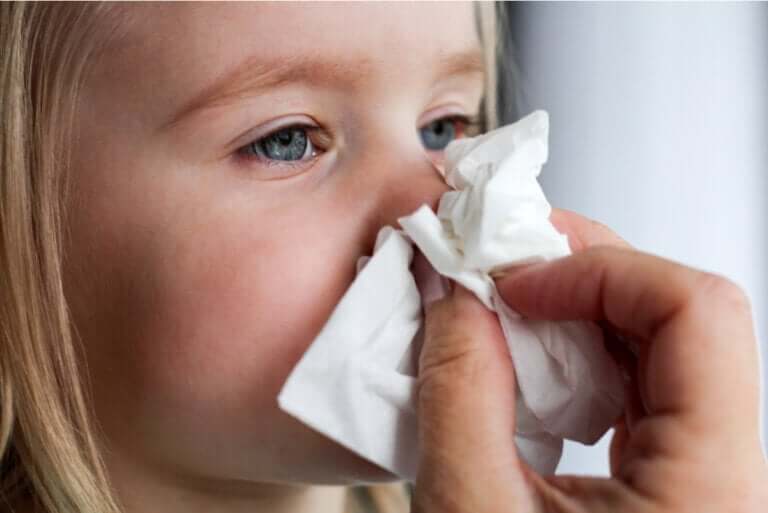 Everyone knows about nasal mucus, but not many people know what it really is and what it does. Incredibly, the average adult produces about a quart of this substance through the nose and an additional quart in the throat every day.

Nasal mucus has different textures and colors. There are soft and hard, black and white, green and yellow. In general, they’re related to dirt, but their main function has to do with preventing unwanted particles from entering the respiratory system.

In one way or another, nasal mucus indicates whether a nose is working as it should or not. Although some people might pick their nose to get rid of the sticky substance, it’s best to use a clean tissue.

What is nasal mucus?

This is the fluid that comes out of the nose. It’s not the only mucus secretion that the body makes, but that name has become popular. Bronchial secretions are usually called phlegm.

Mucus is a viscous liquid that the epithelial cells of the nose and other organs excrete. These cells have cilia, which are a type of hair. These move mucus into the nostrils.

They do several different things, but these are the most important:

In general, we can say that nasal mucus is a defense and protection mechanism against external agents that can enter the body through the nose. Also, they are key to fighting allergies and colds.

How does nasal mucus form?

Mucus forms in the nose. It’s a substance that contains water, proteins, some chemicals and salt. It has a viscous and sticky texture, which helps it trap harmful substances from the environment.

Most of the mucus the nose and throat produce mixes with saliva and you swallow it. Part of it stays in the nose. Then, when you sneeze or blow your nose, you get rid of the mucus. If not, it stays in your nose and dries up.

If you catch a cold, the body produces more histamine. This is a substance that causes the membranes of your nose to swell and produce more mucus. Then, this forms a thick layer of mucus that helps protect the nasal tissue.

Likewise, when there’s more mucus, you need to get rid of it more frequently, either because you need to blow your nose more or sneeze more. This helps expel the infectious agent. Also, something similar happens with allergies.

There are many popular myths surrounding nasal mucus. Since they’re myths, they aren’t truthful. For example, some people think that they are brain cells that descend from the skull and reach the nose, which is false.

In the same way, some people think it’s traces of cerebrospinal fluid. Others think that green mucus implies a serious infection, or that not having it means your nose is cleaner. None of this is accurate.

Also read: What Does a Cough with Green Phlegm Mean?

Why does mucus change color?

One of the most striking aspects of mucus is that it changes color. Generally speaking, this happens because of the substances that come into contact with it. From that point of view, we can see different shades.

This is the common color and the one that is considered normal. However, if it leaks too much, it might be a sign of allergic rhinitis. In other words, the absence of color doesn’t always mean that there isn’t a health problem.

Yellowish or greenish mucus is a sign of infection, but it doesn’t always mean that it’s serious. It takes on this color because the immune system increases the production of defense cells called neutrophils.

These cells secrete enzymes to kill the infectious agent. One of those enzymes, peroxidase, gives mucus that tone. Usually, mucus changes color gradually; it goes from transparent to yellow, then to green.

This color means that there’s some blood in the mucus. It’s possible that some of the small blood vessels in the nasal membrane have broken. Also, there could be a small injury from sneezing or blowing too much. However, seeing this shouldn’t immediately alarm you.

It’s not very common to have this color mucus. Usually, it takes on this color because you inhaled smoke or soot. Also, it can be a sign that you are in a highly polluted atmosphere.

Nasal mucus is a natural thing

Mucus can be gross, but it’s actually a sign that everything is working well in your nose. Even so, it’s best to teach kids not to eat it. It’s not that it’s toxic, but it’s a residue of the body.

In addition, it’s important that kids and adults don’t pick their noses, as this can easily injure the nasal tissues. It’s best to blow gently or use a nasal rinse to clean your nose.

Do you Know How to Prevent Colds?
Who doesn't want to know how to prevent colds? We have to avoid colds since it affects our health. Learn how to avoid this yearly issue! Read more »
Link copied!
Interesting Articles
Body
What Is Disc Desiccation and How to Treat It?

Disc desiccation is a medical condition characterized by dehydration of the intervertebral discs. These make up a soft and flexible…