What Does a Cough with Green Phlegm Mean?

The color of the phlegm that accompanies a cough can, in part, help to diagnose different respiratory tract diseases. In this article, find out what a cough with green phlegm could mean. 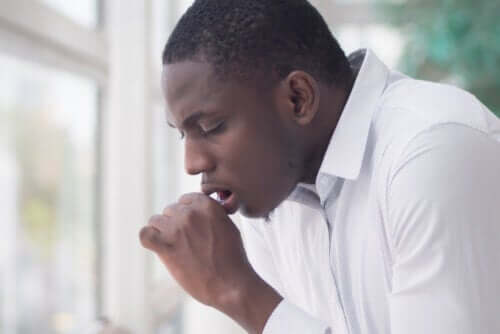 What happens when green phlegm accompanies a cough? Is it always an infection that should be treated with antibiotics?

This bodily fluid is secreted by the mucous membrane of the respiratory tract in mammals and, according to bibliographic sources, the function is to maintain the humidity of the respiratory tract. Also, phlegm traps and facilitates the expulsion of foreign agents from your body. Because it also contains lysozymes (antibacterial substances) and antibodies, we can say that it has antimicrobial properties.

As strange as it may seem, the color of the phlegm can reveal the nature of the patient’s illness. In this article, we’re going to tell you what it means, and particularly when the phlegm is a greenish color. We’ll also explain what steps you should take.

The different colors of phlegm

As unpleasant as it may seem, understanding where phlegm’s coloring comes from, and why this color change occurs is essential for detecting various diseases.

Medical organizations are picking up on the meaning of this variation:

As we’ve seen, phlegm’s coloring shows what the immune system is trying to expel from the body. A cough accompanied by brown phlegm may mean, for example, that the patient has been inhaling soil or mineral compounds for a prolonged period. It could also indicate that there’s dried blood in some part of the respiratory tract.

On the other hand, a red coloration may indicate a serious disease in some cases. It can show that there’s bleeding in some part of the body that’s in contact with the nasal cavity and the mouth.

In the next section, we’ll focus on the topic of this particular article: What does a cough with green phlegm mean?

Get to know more: How Contagious Is Bronchitis Exactly?

A cough with green phlegm: What does it mean?

As we’ve already mentioned, the presence of green phlegm with a cough indicates that the body is fighting an infection. Paradoxical as it may be, this greenish coloration is due to the high number of dead white blood cells and other substances derived from the battle against the virus or bacteria.

The most common infections that give rise to this sputum are the following.

According to research, acute bronchitis is the most common cause of diagnosis in people with a cough who attend outpatient clinics. In this case, we’re dealing with an infection of viral origin, as rhinoviruses (which cause the common cold) are the cause in 90% of cases.

Although it’s not so common, we should also point out that some bronchitis is caused by bacteria. According to the source cited above, 32% of patients with a cough that lasts more than two weeks are infected with Bordetella pertussis bacteria.

Some added symptoms are as follows:

In this case, we’re facing a much more aggressive and serious illness than the previous one, as it’s associated with a certain risk of mortality (up to 1.33 per million inhabitants, according to studies). The Cystic Fibrosis Foundation (CFF) reports that this disease is hereditary and is characterized by a malfunctioning of the exocrine glands.

In a normal situation, the glands produce mucus, saliva, and other fluids that help the body function normally. In patients with cystic fibrosis, this mucus is too thick, clogging the lungs and intestines. A cough with persistent greenish phlegm tries to get rid of this thick, dysfunctional mucus.

Other important facts about this disease are that:

According to the World Health Organization (WHO), pneumonia is responsible for 15% of all deaths in children under five years of age. It’s an illness caused by an infection, either a virus, bacteria, or fungi. Again, coughs with greenish phlegm are indicative of the immunological fight against these microorganisms.

Some of the diseases that cause it are the bacteria Streptococcus pneumoniae, Haemophilus influenzae Type b, the pathogenic fungus Pneumocystis Jiroveci, and the respiratory syncytial virus. It causes the patient’s pulmonary alveoli to fill up with fluids and pus. This makes breathing painful and limits oxygen absorption.

Coughs with greenish phlegm are typical of sinusitis with a bacterial origin. According to statistical studies conducted in the United States, this condition affects about 31 million patients per year.

In this case, the pathogenic bacteria settle in the sinuses, causing a stuffy nose, phlegm expulsion, and pain or pressure in the areas around the nose and eyes.

You may be interested in: 4 Solutions for a Sinus Headache

How do you deal with a cough with green phlegm?

As we’ve seen, green phlegm with a cough can be indicative of an immune response to an infection or a hereditary disease, such as cystic fibrosis. Many natural remedies can help relieve throat irritation, but depending on the severity of the condition, medical treatments may be necessary.

In many cases, respiratory tract therapies aren’t essential, as they’re self-reliant. This means that the patient’s immune system can cope with the invasion on its own. The body will typically be free of symptoms in approximately one week.

In other cases, it may be necessary to use antibiotics, inhalers to open the narrowed airways of the lungs, and even surgical interventions. The decision will be taken by the specialist who takes care of the disorder.

That’s why it’s important to see a doctor.