Hallopeau syndrome is a very rare disease that mainly affects middle-aged women with a history of smoking. There is no known cure. 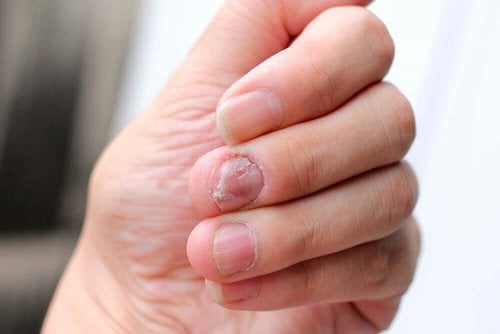 Hallopeau syndrome is a rare condition, though some people think that it’s actually quite under-diagnosed. Be that as it may, there are very few reported cases and the majority of them are in middle-aged women.

The name Hallopeau syndrome comes from the French doctor François Henri Hallopeau, who made great advances in dermatology. We owe the description of acrodermatitis continua to him, and important contributions to the study of leprosy, cutaneous tuberculosis, etc.

Hallopeau syndrome was first reported in 1888 by Radcliffe-Crocker. However, it wasn’t until 1890 that Hallopeau described the disease more specifically, which at first was called acrodermatitis continua suppurativa.

Hallopeau syndrome is a chronic, inflammatory disease that affects the fingers and toes. Doctors also know it as acropustulosis, pustular acrodermatitis, acrodermatitis perstans, or dermatitis repens.

The main characteristic of this disease is an eruption of sterile pustules. At the start, they just affect the ends of your fingers and toes, but they tend to spread out little by little to the whole area.

Generally, in chronic cases after a good amount of time, the eruptions normally give way to incapacitating injuries, mainly atrophy, onychodystrophy, and osteolysis. All of these can cause permanent damage.

Generally, the disease starts on your fingertips, and it rarely appears on your feet first. The first thing you can see are some small pustules that then join together and form lakes of pus. This pus doesn’t contain bacteria, which is why it’s called “sterile”.

When the pustules break, they leave the skin red and shiny. Then, new pustules appear in the area. When they form under the nail bed, it often causes loss of the nail plate or onychodystrophy, a significant alteration of the surface of the nail.

The wounds vary depending on the stage of the disease. In acute episodes, the pustules show the described behavior, tending to extend to nearby areas. When it becomes chronic, it’s possible for it to completely destroy the nail matrix, which leads to the loss of the nail, or anonychia.

Likewise, the skin atrophies severely. It causes inflammation in the phalanges, or osteitis, and later this turns into osteolysis, or destruction of the bone tissue. Many times this ends up affecting the joints. The disease can spread to cover the top of the forearm or the foot.

Scientists aren’t sure what causes Hallopeau syndrome. However, nowadays there is a consensus around the fact that this disease is a localized clinical form of pustular psoriasis, which is a serious complication of typical psoriasis.

It’s hypothesized that Hallopeau syndrome is an autoimmune disorder, characterized by an immune dysregulation located in the skin. It’s known that the majority of cases happen in middle-aged women with a history of smoking. It also commonly occurs due to an infection or injury.

The diagnosis of Hallopeau syndrome is clinical and histopathological. The first thing a doctor should do is determine if the pustules are sterile. To do that, they generally make a culture, although sometimes a biopsy is necessary.

From the histopathological point of view, the main characteristic is the pustule, filled with neutrophils. There isn’t epidermal necrosis, nor spongiosis. Often there is moderate lymphohistiocytic infiltrate. This is located in the upper part of the dermis and has focal edema.

Hallopeau syndrome can be very resistant to treatments once it reaches the chronic phase. To this day, they haven’t developed any medication that successfully achieves lasting remission. In fact, the cases are so rare that there aren’t even clear treatment steps.

The disease is normally confined to the original area for several years. However, it also often spreads to nearby areas. In fact, in extremely rare cases, the problem becomes generalized and can affect mucous membranes.

In special cases they have reported spontaneous recovery. But, more commonly, it has several episodes of exacerbation, in which the lesions increase without any apparent cause. This is a chronic and uncooperative disease.

What Is Horner’s Syndrome?
Horner's syndrome is always caused by another disease the patient has suffered. Due to this syndrome, the most characteristic symptom is that the pupil on the affected side of the face contracts. Read more »
Link copied!
Interesting Articles
Illnesses
Characteristics of Henoch-Schönlein Purpura Disorder