What is Autonomic Hyperreflexia?

Autonomic hyperreflexia is a disorder that, if not treated correctly, can lead to death. Bone marrow lesions are the most common causes of this issue. 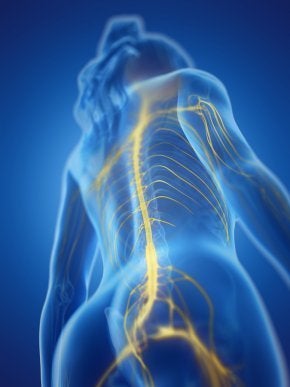 Autonomic hyperreflexia is a disorder that, if not treated correctly, can lead to death. Bone marrow lesions are the most common causes of this issue.

It’s an abnormal and exaggerated reaction of the involuntary or autonomic nervous system to stimulation. Autonomic hyperreflexia can include changes in heart rate, excessive sweating and also high blood pressure among other symptoms that we will see in more detail throughout the article.

What are the causes of autonomic hyperreflexia?

The most frequent cause is a spinal cord injury, as we mentioned at the beginning of the article. A patient who has suffered from this has an excessive response to the types of stimulation that don’t bother healthy people. However, there are other causes of this disease. For example, Guillain-Barre syndrome. It’s a disorder in which our body’s immune system attacks a part of the nervous system.

Some adverse effects of certain medications as well as severe head injury and other brain injuries such as subarachnoid hemorrhage, may also be some causes of this issue. Finally, consuming illicit stimulants like cocaine and amphetamines is another cause of autonomic hyperreflexia.

Read this article: Four Things You Can Do to Strengthen Your Brain

Paleness of the skin and involuntary muscle contractions occur in the body below the spinal cord injury. Additionally, redness, significant sweating and pupil dilations or mydriasis can be seen in the area above the lesion.

The patient also usually experiences headaches, shortness of breath, blurred vision, anxiety and chest pain. In addition, they may experience complications such as loss of consciousness, seizures and brain hemorrhages. For these cases, autonomic hyperreflexia is considered a medical emergency disorder.

In addition to those mentioned, other symptoms may appear, such as:

Despite the numerous symptoms described, there are situations in which the disease doesn’t cause symptoms, even when it causes a dangerous increase in blood pressure.

How can you prevent it?

To prevent this situation, you should avoid using drugs that can cause or worsen its adverse effects. People who have a bone marrow injury should follow a series of tips in order to prevent autonomic hyperreflexia as best as possible.

In addition, they must pay special attention to keeping the pain under control. It’s also very important that they avoid fecal retention.

The prognosis of this disease will depend on the cause of it. If the hyperreflexia is due to effects of some pharmacological treatment, then the patients, as a rule, usually recover by suppressing the administration of the responsible drugs.

However, if something else is the cause, the recovery will depend on how well the disease can be treated. As for the possible complications, they can occur due to the side effects of the medications used. Severe and prolonged hypertension can cause:

This disease is potentially deadly. Therefore, it’s very important to identify and treat the problem quickly. The treatment will depend on the cause of the disease. Additionally, if the hyperreflexia is caused by drugs, you must stop taking them.

If your heart rate is causing the symptoms, anticholinergic drugs, such as atropine, can be used. In addition, it’s necessary to treat high blood pressure quickly. However, you must do it with care, since it can also decrease very sharply. Finally, if the heart rate is unstable, the patient may need to wear a pacemaker.

Five Exercises to Strengthen Your Spine
To strengthen your spine, it's important to do regular exercise. Luckily, there are many activities that you can do at home. Read more below! Read more »
Link copied!
Interesting Articles
Illnesses
Can Celiac Disease Cause Infertility?