What Are the Symptoms of Agoraphobia?

Agoraphobia causes anxiety crises in certain basic situations in life, and may cause both psychological and physical symptoms. In this article, we'll explain all about it. 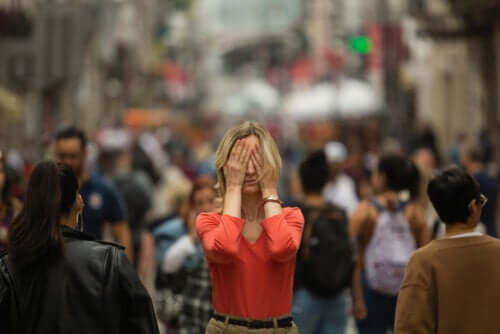 Many different entities have taken on the task of describing the symptoms of agoraphobia. However, they’ve all found that it’s quite a complex disease that each person may experience in different ways. If we had to classify it, we would classify it under anxiety disorders.

The people who suffer from it experience anxiety or exaggerated fear about places or situations in which they feel defenseless, trapped, or embarrassed. For example, this may include open spaces, very crowded places, or even public transportation.

The problem here is that the symptoms of agoraphobia vary greatly, and the phobias sometimes overlap each other. In this article, we’ll explain the most frequent manifestations.

The symptoms of agoraphobia according to the DSM-V

The DSM-V is the Diagnostic and Statistical Manual of Mental Disorders, updated in 2013. It’s the tool that psychologists and psychiatrists usually use to identify different illnesses and conditions. According to this manual, the most frequent symptoms of agoraphobia are the following:

At this point, we should also emphasize that other mental disorders must be excluded, in order to establish an accurate diagnosis. The reason for this is that certain specific phobias, such as social phobia, often tend to be confused with agoraphobia.

You may be interested in: Anxiety Attacks: What No One Understands

Some examples of symptoms of agoraphobia

The symptoms of agoraphobia, as we’ve already mentioned, vary from person to person. This disorder frequently causes a fear of being in open places, especially when one is alone. However, it can also occur in closed places, such as theaters or movie theaters.

Something else that’s also quite characteristic of agoraphobia is the fear of experiencing an embarrassing situation. Sufferers are afraid of what would happen if they fell to the ground or had an anxiety attack in front of other people. This fear tends to be quite extreme and very intense.

The problem here is that all of this ends up affecting every single area of the person’s life. As we’ve already mentioned, avoidance behaviors will then start to form.

If, for example, they’re afraid of taking public transport to go to work or to carry out a leisure activity, then the avoidance behavior will start to condition how they act and react, and will prevent them from taking part in all sorts of activities.

Other considerations about agoraphobia

According to an article published in the journal Professional Pharmacy, symptoms of agoraphobia usually appear in late adolescence or early adulthood. Most of these people take refuge more and more in their homes, only going out for what they consider to be necessary.

If this disease isn’t treated in time, then it ends up becoming chronic and feeds on itself, becoming quite disabling. We must bear in mind that, after all, it is a panic disorder, and, because of that, is also accompanied by physical symptoms.

An article in the Journal of Psychopathology and Clinical Psychology explains that, when a crisis occurs, the heart rate accelerates and the person may experience a sensation of suffocation. Sweating increases, and there’s discomfort and pressure in the chest area.

In extreme cases, this can lead to dizziness and fainting. The anxiety experienced makes the person feel that they’ve lost control, and this can also produce a fear of death.

What you should remember about agoraphobia and its symptoms

What we must keep in mind is that agoraphobia is a complex disorder that can manifest itself in many different ways. These people are afraid of specific situations, such as using public transportation or going to places where they feel they won’t receive help in the event of a crisis.

Because of this, it’s essential that they receive appropriate psychological support and treatment. If not, the disorder may become chronic and end up defining and controlling these people’s lives, preventing them from carrying out their normal daily routine.

Guilt is an Internal Fear of Punishment
Guilt is a very unpleasant feeling that we all have experienced. But where did this guilt come from? Is guilt an internal fear of punishment? Read more »
Link copied!
Interesting Articles
Healthy mind
Wu Wei, The Art of Solving Problems Effortlessly