What Are Black Spots on the Tongue? 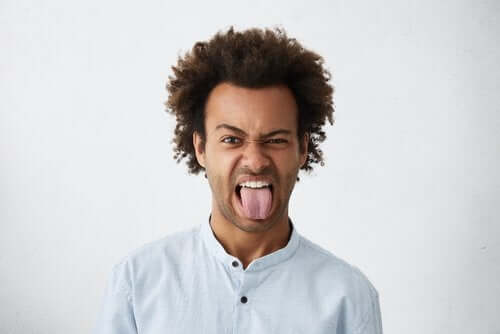 It might seem strange, but black spots on the tongue are somewhat more frequent than you think. Understandably, they often worry those who have them. However, their causes are many and varied.

For one, their location and appearance vary. Also, these spots may appear on the back and even look hairy. They can also sprout in other areas, in groups or individually. They’re temporary most of the time so their duration depends on why they’re there, to begin with.

In today’s article, we’ll explain what the main causes of black spots on the tongue are together with their possible consequences.

What causes black spots on the tongue?

Under normal conditions, the tongue is red and covered with small bumps called papillae. However, there are some instances in which the papillae lose color swell, thus having the appearance of black spots.

Black spots on the tongue are usually due to poor oral hygiene. However, they can also be a symptom of oral cancer, problems with medication, and smoking.

In this case, the tongue becomes dark and has a hairy appearance. It happens because dead skin cells aren’t exfoliating as they should. Thus, they accumulate and lead to swelling of the papillae. This is because the papillae are responsible for trapping bacteria, food debris, tobacco traces, and so on. These substances dirty the tongue.

This is a mild and temporary oral condition. Many processes could cause it:

Having black spots on the tongue is usually alarming. However, there’s no reason for it to be so as it doesn’t necessarily lead to further health problems and is painless. Thus, it usually goes by eliminating the above factors and following proper oral hygiene.

You may be interested: Seven Natural Remedies for a White Tongue

Hyperpigmentation of the tongue

This is a benign disorder that also leads to black spots on the tongue. It’s relatively common in African and Asian ethnicities. It commonly happens between the ages of 20 and 30, although it does manifest in some children. Generally, it affects the tongue’s lateral surfaces and its tip.

The cause for this condition is still unknown, although scientists are investigating the possibility of a genetic factor. Some studies continue to try to demonstrate the type of inheritance of this pathology.

Fungal infection is common in people with poor oral hygiene. However, the black spots might also appear after taking certain antibiotics. This is because antibiotics alter the bacteria of the tongue, including the good kind.

Even though we seldom stop to think about it, the tongue can also bruise. Any blow or bite that doesn’t tear the tissue could form a small bruise on the tongue. It often looks like small black spots on the tongue.

Black spots on the tongue due to medication

As we mentioned before, antibiotics can weaken the tongue’s microbiota. So, it’s easier to catch a fungal infection.

However, some medications can also cause black spots on the tongue. The mechanism of this side effect is complex. However, it’s just a transitory situation. Your tongue will be normal again as soon as you stop taking it.

The important thing about black spots on the tongue

Black spots on the tongue may appear for different reasons. However, most cases are due to bad habits such as improper oral hygiene and smoking. Thus, it’s very important to maintain proper hygiene. Also, most dentists recommend brushing your teeth at least twice a day. Similarly, you must floss and gargle daily.

Also, try to quit toxic habits such as smoking. Tobacco doesn’t only cause black spots on the tongue, it could also lead to oral cancer.

Consult your doctor if you notice changes in the color of your tongue or any part of your mouth. They’ll do any necessary relevant tests to diagnose you and to rule out any carcinogenic processes.

Five Possible Symptoms of Tongue Cancer
While the symptoms of tongue cancer can be attributed to other less serious problems, it's important to see a doctor if you have them. Read more »
Link copied!
Interesting Articles
Health
Atopic Skin: What Is It and What Causes It?