Understanding the Four Stages of Sleep

Strangely enough, science still has many questions about the true nature and function of the stages of sleep. What we do know is that a series of changes occur and give rise to them. 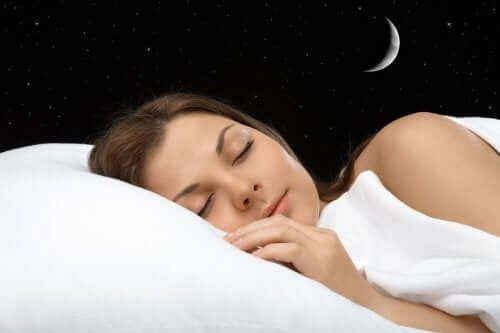 The stages of sleep are the periods in which changes occur while we’re actually asleep. Many people believe that we’re basically in a state of lethargy during this period of time. It isn’t so, though. In fact, several processes take place during sleep and every stage has certain characteristics.

Medical tests such as electroencephalogram, electromyography, and electrooculogram confirm the presence of the different stages of sleep. The changes in the electrical conductivity of the skin, the respiratory rhythm, and the heart rate, in each phase, are observable through these.

Some people don’t go through all the phases of sleep, and, thus, wake up tired and feel sleepy during the day. This gives rise to different problems. As you can see, it’s important to complete the sleep cycle in order to maintain mental and physical balance.

General characteristics of the four stages of sleep

Sleep isn’t a linear process, but a cyclical one. In other words, there are several phases that follow one another sequentially. It begins with a numbing state until you reach your deepest sleep. It then returns to the initial point and the cycle repeats.

Each full sleep cycle lasts between 90 and 100 minutes for most people. We usually have between four and six cycles during a normal rest period throughout the night. The order the different phases of sleep occur in is always the same.

Are you aware of The Impact of the Menstrual Cycle on Sleep?

The phases of slow sleep

The NREM (Non-REM) phase is called quiescent sleep because it corresponds to the stage in which the brain presents slow waves. It represents the stage of transition between the waking state and sleep. What predominates is a state of light sleep, with attenuated breathing.

You’re not properly asleep during this stage, only in a state of dreaming. You still hear the sounds of your environment and are only partially disconnected from what’s happening around you. This phase lasts about 15 minutes total — from the moment you close your eyes. However, you only have about five minutes of actual sleep.

Quiescent or NREM sleep is divided into four phases of sleep, each with its own characteristics; these are:

Read about Sleep Inertia: Why You Wake Up in a Bad Mood

The second of the two major phases of sleep is called REM (rapid eye movement). The brain is quite active during this stage but all the motor neurons block simultaneously so that you cannot move while you’re in this stage.

This is also the stage where we dream and perceive such images as real. People who wake up during this phase will clearly remember what they were dreaming — at least in 80% of people. You would try to act upon what you’re dreaming if you could move during this stage.

Finally, the REM phase occurs at different times during sleep and has a variable duration. It lasts about 10 minutes the first time it occurs and between 30 to 40 minutes the last time — during an eight-hour sleep. It begins with rapid and irregular breathing and then moves into a state of deep sleep.

Five Remedies to Steady Your Nerves and Sleep Well
Tension often leads to stress but there are times when you're in serious discomfort and need to steady your nerves in order to be able to sleep.  Read more »
Link copied!
Interesting Articles
Illnesses
Perineal Tears: What They Are and How to Recover from One