Sleep Inertia: Why You Wake Up in a Bad Mood

Clumsiness and bad mood when getting up is common in people who suffer from sleep inertia. This is a condition in which you suffer a reduction of various cognitive and emotional capacities right after waking up. 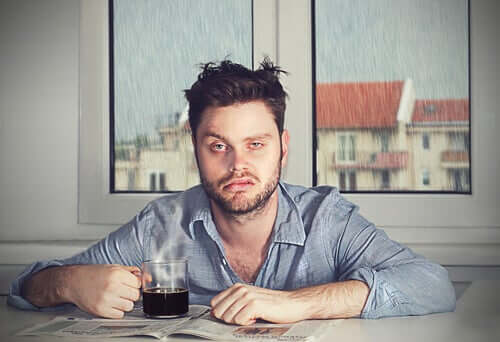 Many people feel tired when getting up, despite having slept the number of hours specialists recommend. Their minds fail to think clearly and their bodies are clumsy. It seems like they’ve suddenly been possessed by clumsiness and a bad mood. However, what they experience is far from a strange phenomenon. This is a problem known as sleep inertia.

Science began to disseminate data on sleep inertia in the 1960s. They discovered that this is a temporary state of reduced cognitive ability and alertness that generally lasts for about an hour after the person wakes up.

However, this period varies according to the case; some people experience it for fifteen minutes and others for an hour or even longer. Specialists believe the duration is related to the phase of sleep that was interrupted when the person woke up.

This period of awkwardness and bad mood after sleep is characterized by a marked reduction in the typical alertness of the awake person. There’s a large increase in drowsiness and poor brain performance.

Likewise, you might experience irritability, intolerance, bad mood, and even states of depression. Sleep inertia may be accompanied by general disorientation or confusion.

It’s a phenomenon that interferes with normal mental or physical tasks and causes a decrease in response time, poor short-term memory, and a low speed of thought. It’s almost like jet lag.

Read also: What You Do During the Day Impacts Your Sleep

Clumsiness and bad mood upon waking: a medical matter

Contrary to what many people believe, experiencing clumsiness and a bad mood when a person gets up is a medical matter and not one of character or personality. In fact, the American Academy of Sleep Medicine has included sleep inertia in the list of parasomnias, or sleep disorders.

Sleep inertia affects adults and adolescents without distinction. Therefore, age isn’t the reason people suffer from it. Rather, it could be a question linked to modern life, which has distanced itself from natural cycles and doesn’t respect the circadian rhythms of sleep.

Circadian rhythms are the physical, mental, and behavioral changes that follow a daily cycle in direct relation to light and darkness. Some theories hold that having broken the natural cycle of waking up with the sunrise and sleeping in the company of artificial lights such as television or other screens has affected our sleep.

During sleep inertia, the brain carries out activities typical of the phases of deep sleep. Hence, some studies propose a relationship between circadian rhythms and sleep inertia. This would explain sleep inertia after the brain awakens during the repairing sleep phase, according to your biological clock.

You may be interested in: Do You Know the Incredible Stages of Sleep?

Information to keep in mind

Although sleep inertia seems to be harmless since it only exposes those who live together to the clumsiness and bad mood of those who suffer from it, it can be more than this. Scientific studies have shown that if sleep is interrupted during a deep phase, brain performance can drop dramatically.

This poor brain performance, slow responses to everyday situations, and difficulty overcoming drowsiness may pose a risk in certain professions. Workers who take naps on the job expose themselves to their sleep being abruptly interrupted and experiencing sleep inertia, which can pose a risk to others.

Although researchers haven’t found any effective ways to prevent sleep inertia and thus avoid this clumsiness and a bad mood when waking up, they recommend you maintain strict sleep hygiene.

Such hygiene includes, among other measures sleeping between seven and eight hours a day without interruption. It also includes not sleeping with televisions or computers in the room. Finally, it’s important to set a routine and avoid consuming stimulants (like coffee) before going to sleep.

How to Improve Your Night Routine to Get Better Sleep
The restful sleep you get at night clearly affects your day-to-day activities. In this article, discover how to improve your night routine. Read more »
Link copied!
Interesting Articles
Anatomy and physiology
The Causes of Bradypnea and its Treatments