Undercooked Foods: Can They Make You Sick?

Some foods are at high risk of contamination. For this reason, it’s important to cook them correctly to avoid food poisoning. In this article, we’ll talk to you about the risks of undercooked foods and the preventive measures you should consider. 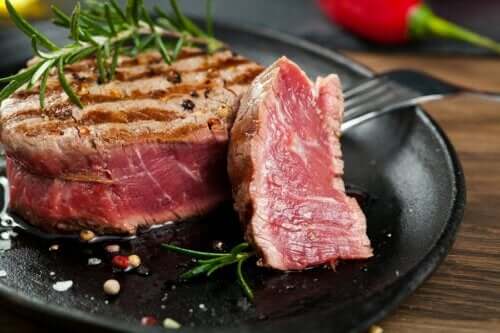 Nowadays, people are increasingly consuming raw foods. This is due to the influence of Asian and South American cuisines. Nevertheless, you must cook certain foods properly to prevent complications. But what happens if you eat undercooked foods?

Consuming undercooked foods can sometimes lead to food poisoning, which can be very unpleasant and risky. Therefore, you need to know why some types of food must be cooked well and which ones can cause health problems.

Cooking is a food safety measure

One of the functions of cooking food, apart from improving the organoleptic qualities, is to kill bacteria. By subjecting foods to high temperatures, we ensure that the living organisms that inhabit them are destroyed.

This eliminates bacteria, fungi, or other microorganisms that have been shown to colonize the digestive tract and cause diseases, such as salmonellosis.

One of the most practical examples is the pasteurization of milk. This liquid is subjected to high temperatures for a short time to ensure it’s safe to drink.

This process allows people to keep milk in a container for a long time until it’s consumed. This ensures the absence of pathogenic microorganisms.

Be careful with meat

Meat is one of the foods that you have to cook thoroughly. Leaving a steak or chop somewhat raw inside usually isn’t a problem.

Pathogenic organisms are found on the surface of these foods. Therefore, you only need to thoroughly cook the surface to ensure they’re safe to eat. However, minced meat is a bit more complicated.

A typical example is hamburgers. In this type of product, all meat is susceptible to contain pathogenic organisms, both on the surface and the inside. Thus, you must make sure that a hamburger has an internal temperature of 140 to 160°F.

You should also read: Do We Need to Disinfect Food to Prevent Infection?

Fish is another risky undercooked food

During the last several years, the consumption of raw fish has become popular due to the influence of the oriental culture. Sushi chains and other types of dishes prepared with this raw product have proliferated.

However, for the fish to be consumed raw, it must be frozen beforehand. This process kills any microorganisms that may be present. Consuming raw fish without respecting food security regulations has proven to be a health hazard.

According to a study published in Diseases of Aquatic Organisms, the most dangerous organism in these types of products is usually anisakis. It’s found mainly in whitefish and freezing is an effective way to kill it. Also, it’s quite common for recipes that require raw fish to include some acid, such as lime juice.

Said pH variation is another hard blow against the microorganisms that can live on the surface. But if you’re going to eat fresh fish that didn’t undergo freezing, you need to make sure to cook it properly.

This is similar to what we explained with meat. You need to make sure to cook bluefish on the outside and to cook white fish thoroughly. This way, you make sure that they won’t make you sick.

Eating raw or undercooked foods can pose a health risk. You need to know where a product comes from and if it was frozen beforehand. This way, you can determine the risk of consuming it with an incomplete cooking method.

You must be especially careful with burgers and white fish, as they’re critical foods from a food security standpoint. If you’re going to eat any type of raw food, make sure to freeze it beforehand.

Also, it’s usually a good idea to add some type of acid while making the dish to vary its pH. This way, you ensure that the possible pathogenic organisms that inhabit it die.

The Effects of Mercury in Fish
There are some varieties of fish that are contaminated with mercury and other heavy metals. We'll tell you all about the effects of mercury. Read more »
Link copied!
Interesting Articles
Health
Types of Syncope or Fainting