Bulimia is an eating disorder that includes binging food, followed by periods of compensating behavior. As such, it can present in two forms. Do you want to know more? 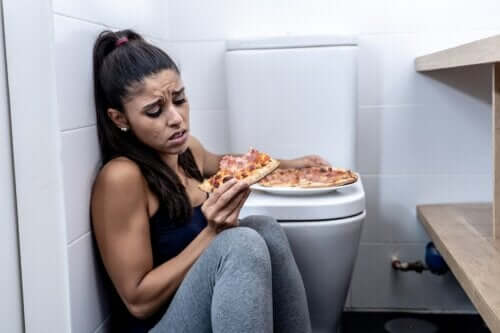 Did you know that there are different types of bulimia? Although many people have heard about this illness, not everyone is aware of how it occurs.

As some scientific articles have suggested, this eating disorder is one of the most common among adolescents, especially among women.

Its symptoms and the factors associated with it are quite varied. However, it’s commonly associated to societal pressures regarding having the perfect figure. To get to know more about this, we invite you to continue reading.

Bulimia, also called ‘bulimia nervosa’, is an eating disorder (ED) that is characterized by the presence of recurrent binge eating, followed by compensating actions like induced vomiting, laxative abuse, fasting, or intense exercise. The main objective here is to avoid gaining weight.

Often, this diagnosis is given when these symptoms occur at least twice a week, over a period of three months. It’s important to distinguish it from binge eating disorder (BED), since that doesn’t include periods of compensating behavior.

In those suffering with bulimia, the changes in eating patterns and the obsessive, controlling behavior about weight create a physical and psychosocial deterioration. This then develops into a state of malnourishment, which affects the body’s most important functions, especially in the brain.

Although the female population is the more affected demographic, it also occurs in men, children and pre-teens, regardless of gender. Generally, binge eating begins after a period of dieting; the course of the illness can also be chronic or intermittent, with moments of relapse.

An article published in the Spanish Paediatrics Association states that those who practice activities such as modeling, dancing, athletics, or rhythmic gymnastics are at a higher risk of developing the disorder.

What types of bulimia exist?

In those suffering with bulimia, we can observe a constant worry about body shape and weight; because of that, many people tend to exhibit reduced eating habits, which includes food restrictions and extreme diets. According to the study ‘bulimia nervosa and its subtypes‘, we can split it into two categories. We detail them below.

In purgative bulimia, the person usually consumes laxatives, diuretics, or other medication that affects the metabolism. They also self-induce vomiting, use enemas, and other methods that allow them to ‘reverse’ consuming excessive amounts.

A distinctive characteristic of those suffering with this form of the disorder, is that they usually purge in private. Regardless of how and when they purge, however, with time, the body will begin to suffer changes; from damage of the throat, to problems with the teeth, and digestive tract, to name a few.

Contrasting the previous form, those suffering with this variation of bulimia don’t purge, but rather they exhibit compensating behavior. They assume that their food will be digested and absorbed into the body. Therefore they don’t resort to vomiting or using diuretics or laxatives.

Instead of this, they may carry out behavior to ‘compensate the intake’ like doing excessive exercise or fasting for long periods of time.

What are the risks of suffering from this disorder?

Suffering with one of the types of bulimia we’ve mentioned in this article has a negative impact on health. When someone suffers with the illness for a prolonged amount of time, or if it’s a recurring issue, it can cause the following:

How can we treat the types of bulimia?

The treatment for bulimia nervosa can vary for each person according to the way it presents itself. However, being a disorder with a psychological origin, scientific evidence suggests that the treatment shouldn’t just focus on food and nutrition education, but also mental health.

One of the main objectives is to develop a healthy and friendly personal relationship to food. As such, professionals may implement the following:

In fact, there are admission centers and programs which offer patients support and attention 24 hours a day.

You may also be interested in: 5 Healthy Snacks that Help Treat Depression

Bulimia, regardless of the form in which it presents itself, requires professional intervention. This disorder won’t resolve itself, and actually tends to worsen over time. As such, an early diagnosis is fundamental.

Overall, any warning signs must be taken into account for consideration. Doctors, nutritionists, and psychologists can direct those suffering towards more healthy eating practices in order to beat the disorder.

What Happens if I Vomit After Taking My Birth Control Pill?
The birth control pill is a simple and easy way to prevent pregnancy and when used properly, it is 98-99% effective. What happens if you throw up your pill? Read more »
Link copied!
Interesting Articles
Illnesses
What Is Cyberchondria and How Do You Deal with It?