Types of Celiac Disease and Their Characteristics

Celiac disease is a diet-dependent disease that can severely damage the intestine. We'll explain everything you need to know about the different types of celiac disease and their characteristics. 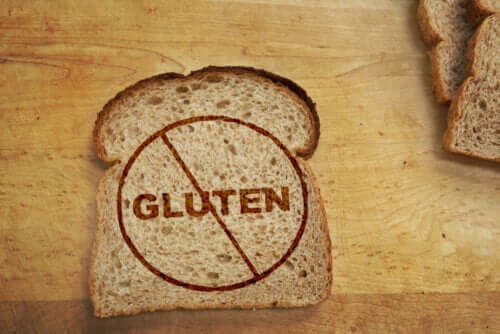 It’s important to know that celiac disease doesn’t always present itself in the same way. For this reason, experts have studied and classified the different types of celiac disease.

This is an autoimmune pathology that has to do with the consumption of gluten. Gluten is a protein that’s present in many foods, such as those containing wheat or barley. In the United States, experts estimate that this condition affects about 1% of the population or approximately 3 million in that country alone.

The problem is that it can be asymptomatic in a great number of cases, which makes arriving at the diagnosis more complex and, therefore, it take longer. So, in this article, we’ll explain everything you need to know about this condition and what the main types of celiac disease are.

What is celiac disease?

As we mentioned above, celiac disease is an autoimmune disease in which there’s a reaction to gluten. This means that when people with celiac disease ingest this protein, it produces an immune system response in the small intestine. In this way, gluten causes damage to the intestinal mucous membrane.

Gluten is a protein that’s present in different grains. For example, in wheat, rye, barley, and sometimes oats. These are foods that are generally very common in the Western diet as ingredients in bread, pasta, cookies, and much more.

The damage to the intestinal mucosa, with the passage of time, affects the absorption of nutrients during digestion. This explains why in many cases, weight loss, anemia, or growth alteration in children occur.

Although experts have yet to determine exactly what causes the different types of celiac disease, we do know that genetics is a determining factor. Similarly, it’s often associated with other types of autoimmune diseases. According to a study in the Cuban Journal of Food and Nutrition, there may be a relationship between celiac disease and type 1 diabetes mellitus.

You may be interested: Gluten-Free Foods: Are They Good For Everyone?

This data arises from the fact that, until recently, experts were unaware that there could be cases without symptoms. Thus, the types of celiac disease are as follows: asymptomatic, symptomatic, potential, latent, and refractory. Below we’ll explain their main characteristics.

Asymptomatic or subclinical celiac disease, as its name suggests, is one in which no symptoms are present. However, through complementary tests (such as an endoscopy to observe the intestine), the presence of the disease becomes evident.

In this type of celiac disease, the patient presents both symptoms and positive test results. However, the signs are very varied. In some people, diarrhea, weight loss, tiredness, vomiting, and abdominal pain appear.

In other cases, instead of diarrhea, we can find continuous constipation. Other typical signs are growth delay in the case of children, meteorism, and abdominal distension. In an indirect way, we find anemia and even constant irritability.

This type of celiac disease refers to cases where people don’t present symptoms. However, they have a high probability of developing the condition. They know this thanks to genetic tests, such as the determination of the HLA-DQ2/DQ8 gene.

However, in these patients, when doctors perform a biopsy of the small intestine tissue, they find no evidence of celiac disease. According to an article in the Chilean Medical Journal, it’s important to follow these people closely, although they don’t need to follow a strict gluten-free diet (for the time being).

What happens in latent celiac disease is that diagnosis of the disease has already taken place, but later, the symptoms and intestinal disorders disappear. For example, someone who was diagnosed as a child and, after following a completely gluten-free diet, doesn’t suffer from the disease again despite reintroducing this protein.

Refractory celiac disease refers to cases in which, despite following a gluten-free diet, symptoms or signs of the disease continue to occur. In order to confirm this, the patient must go more than six months without having any contact with the protein.

There isn’t only one type of celiac disease

The most important thing to know about this topic is that there are different types of celiac disease. Above all, it’s essential to remember that there can be intestinal lesions in people who don’t express symptoms. Therefore, arriving at a diagnosis isn’t an easy task in many cases.

Confirming the presence of this disease in time is essential. This is because damage to the intestinal mucosa can become irreversible and have serious consequences. For example, leading to malnutrition or growth delays in children.

Therefore, if you suspect gastrointestinal symptoms when ingesting gluten, it’s always essential to consult a doctor. Complementary tests are accessible and can be done relatively easily.

The Eight Best Types of Gluten-Free Pasta
Do you know the best gluten-free pasta you can find on the market or even make at home? Discover them in this interesting article! Read more »
Link copied!
Interesting Articles
Illnesses
Diabetes in Children and Adolescents