What Are the Symptoms of Gastroenteritis?

Gastroenteritis is an illness that's usually characterized by symptoms such as nausea, diarrhea and abdominal pain. It can be caused by viruses, bacteria, parasites, or non-infectious agents. 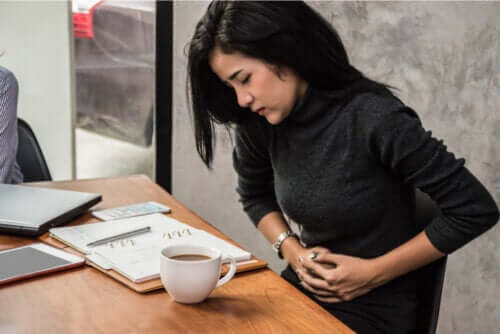 The symptoms of gastroenteritis are characterized by the inflammation that the disease produces in the gastrointestinal tract. Diarrhea, vomiting, abdominal pain, and muscle cramps are common.

According to publications in The New England Journal of Medicine, the most common causes of this illness (90% of outbreaks in adults) are noroviruses, RNA pathogens belonging to the Caliciviridae family.

Thus, despite what you may think, most epidemic outbreaks of gastroenteritis are caused by viruses and not by bacteria. Because of this, you’ll need to know the symptomatology of the disease to know how to treat it effectively.

The lethality of gastroenteritis

Various epidemiological studies estimate that there are between three and five billion cases of gastroenteritis every year throughout the world. This is certainly quite a considerable figure. The World Health Organization (WHO) warns us that the effect is much more serious in children under five years old.

Here are some facts:

As we’ve seen, the most common viral agents causing gastroenteritis in adults are noroviruses, while children under five are more susceptible to rotavirus. If you’d like to know how to differentiate between the symptoms of gastroenteritis according to its causative agents, then read on.

What are the symptoms of gastroenteritis?

The answer to this question depends a lot on the causative agent. Sources such as the U.S. National Library of Medicine emphasize that there are three main pathogenic elements: viruses, bacteria, and parasites.

Let’s take a look at what happens with each of these elements.

According to clinical studies, viral gastroenteritis (also called the stomach flu) caused by rotavirus is usually asymptomatic in adults, with an incubation period of one to three days. In the cases show outward symptoms, these last from five to seven days.

Some of the symptoms are the following:

It’s essential to know when to consult a doctor because even though these diseases don’t usually require any sort of clinical intervention, susceptible people can require urgent treatment.

For example, in both children and adults, the presence of blood in vomit and diarrhea or the inability to retain fluids for 24 hours are clear symptoms that require urgent treatment.

Scientific studies affirm that the bacteria of the Campylobacter genus are the most common causal agents of bacterial gastroenteritis. Half of them are due to exposure to contaminated poultry meat. Other infections that show the same symptoms are Escherichia coli, Salmonella, and Shigella.

The United States Veterans Health Library has compiled the general symptomatology of this type of infection. Some of the most common signs are the following:

As we’ve seen, the differences between viral and bacterial gastroenteritis are minimal, although fever and blood in the stools are the most common symptoms of the latter one.

Of course, a progressive worsening, with a sustained increase in fever beyond 38 degrees Celsius (100 degrees Fahrenheit), the presence of blood in the stools, and evidence of dehydration (dry mouth and absence of urine) are clear signs that medical intervention is necessary.

This is a very wide category and covers parasites from protozoa to tapeworms, nematodes, and other flatworms, which all can cause general gastroenteritis in both children and adults.

Research shows that the symptoms of these types of gastroenteritis are similar to those previously mentioned. However, new signs are appearing such as the following:

This is because, in many cases (such as the tapeworm infection), the parasite is feeding directly from the contents of the intestines or the patient’s blood.

Also, these types of diseases usually last longer than those mentioned before. For example, the tapeworm can survive in the body for two or three years if there’s no anti-parasitic treatment.

We should note that not all episodes of gastroenteritis are due to infectious agents. Some of the situations that cause this general symptomatology are the following:

The warning signs that tell you that you need to see a doctor are a high fever, severe pain, blood in the stools, and dehydration.

What to keep in mind about gastroenteritis

While this group of illnesses shares many obvious symptoms, despite the diversity observed, a medical diagnosis is necessary in all severe cases to apply the most effective treatment for each patient. In general, the presence of body dehydration or blood in the stools are clear warning signs to show you that you need to see a doctor urgently.

So, in summary, the symptoms of gastroenteritis always include diarrhea, abdominal pain, and nausea, regardless of the causative agent. However, there’ll always be very clear variations depending on whether the cause of the disease is bacteria, a virus, or a parasitic agent.

5 Natural Remedies for Gastrointestinal Halitosis
Gastrointestinal halitosis is bad breath that stems from the stomach and therefore is usually harder to control, since it's not enough to just get rid of bacteria in your mouth. Read more »
Link copied!
Interesting Articles
Illnesses
What Are the Types of Cerebral Palsy?

Beauty
The Properties and Benefits of Chamomile Tea

Chamomile tea is a natural infusion that became popular thanks to its interesting medicinal applications. While many of its uses…

Are you looking for quick and nutritious meals? If so, be sure to try the following recipes with tuna. Believe…

Dragon fruit is the fruit of the cactus Hylocereus cacteus. It comes from the south of Mexico and Central America,…