The Relationship Between Body Temperature and Fever

Have you ever wondered why your body temperature rises when you have a fever? It's actually a natural defense mechanism, even though it creates many unpleasant symptoms. Learn more in this article! 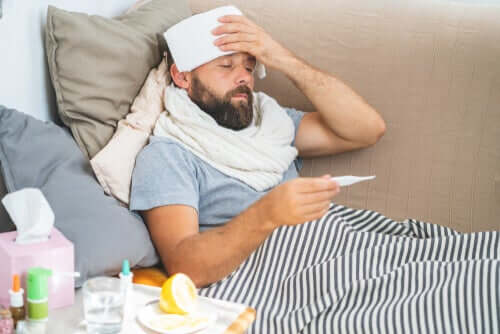 Fever, or pyrexia, happens when the body temperature rises above normal. It’s a protection mechanism, and most of the population experiences a fever at some point during their life.

There are many reasons why someone might have a fever. Oftentimes, it has to do with the presence of pathogens the body identifies as foreign substances.

Of course, this makes us wonder why body temperature rises during a fever. It may seem counterproductive at first because all the symptoms associated with an abnormal increase in body temperature only add to the discomfort caused by the foreign microorganism in question.

However, fever has evolutionary significance like all human physiological responses. Today’s article will discuss how necessary it is for our survival.

A rise in body temperature and fever

As a general rule of thumb, any body temperature above 98.6°F represents a fever episode. Still, there can be four types:

Complications happen quickly when a patient enters a state of hyperpyrexia. This is because it can lead to a series of denaturations of the proteins of the nervous system, with multiple associated failures and a high probability of death if they don’t get immediate medical attention.

To know more What Is Q Fever?

Why do we get fevers?

Fevers are a response of the body to external agents that turns against us if it goes beyond our control. However, why would the body increase its own temperature if it can be harmful?

First of all, we must look at fever as an ancient defense mechanism. The hypothalamus, the section of the brain responsible for regulating body temperature, sends signals to increase it when it identifies molecules called pyrogens in the blood.

A pyrogen is any fever-producing substance. They may be polysaccharides, for example, or debris or products of the cell wall of bacteria.

The immune system, which causes inflammation, responds defensively against the presence of invaders in the human body. In this way, fever is one more element to defend yourself.

The internal body system hopes that, by increasing the temperature, the microorganisms that are most sensitive to changes will die when exposed to higher values. Most infection-causing bacteria and viruses thrive at 99.5ºF.

As the temperature rises, the microorganisms stop reproducing. At least they don’t do it so quickly and effectively. Thus, their vulnerability to the agents of the immune system increases. Fever is, therefore, an evolutionary mechanism with a clear purpose: to weaken pathogens.

You may be interested in Home Remedies for Controlling Your Fever

Are fevers a vestigial or a useful mechanism?

Fever helps fight disease but it can also lead to death or cause irreversible damage in severe clinical conditions. However, this begs the question: Should doctors allow an increase in body temperature? And if so, to what extent?

This is a current debate in the medical field. While some professionals prefer to maintain the fever at medium levels so the immune system responds better, others are in favor of trying to reduce it with antipyretics. There’s no unanimous answer on this. However, they all agree that a patient with a fever above 102.2ºF requires immediate treatment.

It’s for this reason that there are over-the-counter medications, such as aspirin or paracetamol, that can lower body temperature. As modern medicine has given us antibiotics and antivirals, it’s no longer necessary to experience drastic increases in temperature to fight disease.

High body temperature is a reason to consult a doctor

Fever is one more protective mechanism the human body puts in place to expel possible pathogens. It doesn’t only kill the microorganisms that are very sensitive to temperature variations but also weakens the most resistant ones.

For parents, an increase in the body temperature of their children is often a reason to worry. However, they must learn the difference between an initial low-grade fever, which may not exceed 100.4ºF, and a fever of 102.2ºF or higher.

In any case, a fever is always a reason to consult your doctor. Thus, call or visit your doctor if you notice a rise in your body temperature so they can make a prompt diagnosis and prescribe treatment.

Tips for Reducing Fever: Things to Keep in Mind
As long as you know it's not a serious situation, it's a good idea to know what you can do for a fever. Read the following tips for reducing fever.  Read more »
Link copied!
Interesting Articles
Illnesses
What Is Multiple Myeloma?