Turkey and Chicken Meat: What Are the Differences?

In this article, we'll show you the difference between chicken meat and turkey meat, as well as the appropriate method of cooking both. Although they're similar, there are small differences that distinguish them. 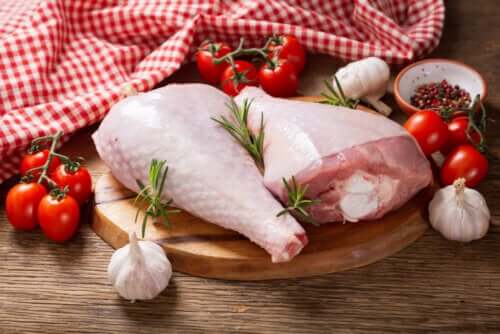 Both turkey and chicken meat are healthy foods that you can include in your diet. In fact, specialists recommend you consume both to improve your general state of health, regardless of your age.

We consider both of these meats to be white meats. These have a better reputation than red meats, which are associated with a higher risk of developing chronic illnesses when we eat excessive amounts of them. Furthermore, we should try to avoid those that are processed by the industry, since they can contain dangerous additives that affect our metabolism.

This food stands out for its high protein content. Studies have shown that these nutrients are indispensable and essential to ensure adequate muscular health. These substances are characterized by their high biological value because they contain all the essential amino acids and are fairly easy to digest.

Furthermore, chicken meat has a low percentage of fat. It’s true that its lipid content consists of the saturated kind, but they don’t pose any threat to health. From a scientific standpoint, the consumption of fatty saturated acids has varied a lot in recent years, as is shown in a study published in Critical Reviews in Food Science and Nutrition.

On the other hand, we mustn’t forget that this food also stands out for its content of group B vitamins. These micronutrients are essential for the body and play a key part in a multitude of metabolic reactions related to obtaining energy. For example, vitamin B12 is a substance fundamental to the prevention of anemia.

To know more: Thyroid During Pregnancy: What’s the Big Deal?

Turkey meat also contains proteins of high biological value in its composition. The difference between both foods regarding this nutrient is barely evident. The only thing that you can specify is that, depending on the part of the animal you consume, you can vary the amount you eat of this type of protein.

However, there are significant differences in the fat content. Turkey meat doesn’t contain saturated lipids. In fact, the total quantity of fat is lower than that of chicken. Additionally, the cholesterol level is notably less.

Despite all of that, this doesn’t have any serious health implications. The saturated lipids aren’t considered harmful, as long as they’re cis not trans.

Lastly, it’s fitting to mention that turkey meat contains a higher level of calcium than chicken: almost triple. This data is interesting when constructing a diet with the aim of preventing skeletal illnesses. There’s evidence confirming that regularly consuming calcium reduces the risk of developing osteoporosis later in life.

You may also be interested in: Controlling High Blood Pressure: It’s Not Just About Salt!

The preparation of the meat matters

When cooking chicken or turkey meat, you have to bear certain considerations in mind. The first of those is that the preferred method of cooking is by grill, oven, or boiling in water. This way the fatty acids aren’t subjected to change, which ensures it says somewhat healthy.

You should avoid frying these foods, as well as covering them in batter. In these situations, you can generate components that are harmful and even toxic for human health, like trans lipids and acrylamide. Both substances are capable of causing systemic inflammation, and affecting organs, tissues, and cells.

On the other hand, the best way to eat the meat is to accompany it with vegetables. This way you ensure an adequate source of micronutrients and antioxidants.

If you want to introduce carbohydrates into the meal as well, the best options are tubers, pulses, and whole rice. It’s important to avoid pasta and bread as much as possible since their high glycemic index can be harmful to the metabolism of sugars in general.

You can include both turkey meat and chicken meat in a healthy diet. They should be included on a regular basis, being one of the preferred sources of proteins with a high biological value. Furthermore, it’s also a good option to consume white meat over red.

Overall, cooking methods will influence the final result of these products and there are barely any significant differences between them. The optimum way to prepare them is by grill or oven, but it’s also possible to boil them. This way the fatty acids remain healthy.

Don’t forget that the basis of a healthy diet is variety, and, for this reason, alternating these products with other foods with high protein content, like eggs, fish and dairy products is also a good idea.

Healthy Habits for Drinking Coffee
In order to form healthy habits for drinking coffee, you need to know its benefits and side effects. Here are some tips to help. Read more »
Link copied!
Interesting Articles
Nutrition
5 "Healthy" Snacks that are Actually Ultra-Processed