Tips for Removing Pimples Near the Pubic Area

Pimples can appear near the pubic area due to several skin disorders. Do you know how to recognize them and how to treat them? 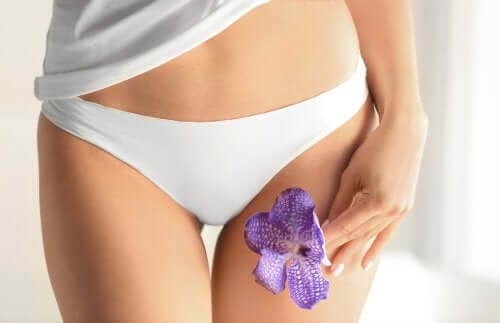 The inguinal region and the pubic area, because of its location and anatomical peculiarities, is very prone to the appearance of rashes and small pimples. These can be very annoying as they can itch and sting. Want to know how to remove the pimples near the pubic area?

You need to know why they appear in order to make a diagnosis and propose a treatment. In addition, you must take into account that it’s a humid area, with many folds that favor the appearance of infections and irritation. It can even be affected by the rubbing of clothes or by contact with chemical products. Let’s see some tips to treat it.

Most common types of pimples bear the pubic area

To know how to remove the pimples near the pubic area, we must be able to identify them by direct observation and know if it’s a pimple, a cyst, a blister, or a wart.

These are the most frequent, along with contact dermatitis caused by chemicals or the composition of the garment fabrics. In this article, we’re going to give you some interesting tips on how to remove the most common pimples near the pubic area.

Causes of pimples near the pubic area

The causes are very varied and it’s impossible to include all of them in this article. However, we’re going to mention the most frequent ones.

Pimples appear in people who have sensitive skin, whether they’re a man or a woman. Both waxing and shaving irritate the hair follicles, causing changes in their structure that finally manifest themselves in the appearance of pimples.

The remains of the substances used for waxing and shaving, once removed, cut or pulled out the hair, penetrate the follicle and cause this reaction on the delicate skin of the area.

They disappear after a few days. Sometimes the waxed or shaved hair grows into the follicle and produces greater irritation and inflammation (folliculitis), which can also become infected.

The sebaceous glands produce fatty substances to lubricate the area. If they’re produced in excess, they obstruct the exit channels, causing inflammation and redness of the gland.

These infiltrate the hair follicle and, due to their growth, produce small whitish-colored bags. They’re very contagious and sometimes severe when the immune system doesn’t function properly.

Rubbing against underwear, or wearing very tight clothing, can cause pimples to appear in the public area. In addition, they’re favored by the temperature that increases the sweating and humidity of the area which stimulates the growth of colonies of bacteria and fungi.

Some sexually transmitted diseases cause pimples to appear near the pubic area. The most obvious and striking is chancre, which produces a large, purulent pimple in the pubic area that can drain out and spread infection.

There are multiple causes such as Bartholin’s gland cysts, genital warts and herpes, which we’ll talk about in other articles.

Now, we want to give you some tips on how to remove the pimples near your pubic area and prevent them from reappearing.

You may be interested in: Why Popping Pimples is a Bad Idea

Preventive measures to avoid getting pimples near the pubic area

The following measures are aimed at preventing pimples from appearing near the pubic area. We also want to help reduce the discomfort and consequences. Put them into practice!

Recommendations for removing pimples near the pubic area

What can you do to avoid pimples near the pubic area?

These tips for removing pimples in the pubic area are usually very effective. However, if you follow these tips and don’t see any improvements, you’ll have to visit a specialist so that they can give you a correct diagnosis and prescribe the best treatment for you.

How to Erase Pimples on Your Arms
Getting pimples on your arms is very common from puberty on. They're not a serious problem, but they're not nice to look at. Here's how to get rid of them. Read more »
Link copied!
Interesting Articles
Beauty
The Causes and Consequences of Photoaging