Three of the Most Common Illnesses of the Vocal Cords

Most of us have suffered from one or more of the most common illnesses of the vocal cords. We've all lost our voices or know someone who has had dysphonia recently. Would you like to know more about it? 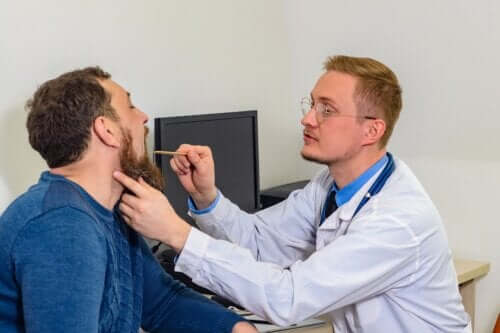 The vocal cords are located in the larynx. They are, in fact, small muscles attached to the upper part of this structure. Above them, we can find folds that aren’t composed of muscle which are called “false vocal cords”. Although they don’t fulfill the same function, they do intervene in speech.

In this article, we’ll take a look at the most common conditions that can affect the vocal cords.

What are the most common illnesses of the vocal cords?

The most common illnesses of the vocal cords can be counted on the fingers of one hand. They’re the main vocal disorders that people suffer from.

To get them, there’s usually some element of risk involved. Teachers, for example, because of their profession, are in a constant state of vocal strain. On the other hand, those who work outside in cold climates are prone to dysphonia.

Some disorders have an infectious origin, while others are due to overuse. This is when there are anatomical changes due to friction between both vocal cords. Sometimes, it’s quite hard to diagnose the illness at first, when symptoms are just starting to develop.

The most frequent diseases of the vocal cords are the following three:

Let’s take a closer look at each one of them.

Vocal cord nodules are benign, bulky formations on the cords. They’re located at the ends, and close up the space where the air should pass. That’s why the voice is affected.

Most often, the initial sign is a change in the tone of your voice. The person can usually notice that they can’t speak in the way they used to, or with the same intensity and tone that they had before the injuries.

The primary cause of vocal nodules is the overuse of the voice. For this reason, experts consider it to be an occupational disease, typical of teachers or singers who use their voice for long periods of time.

However, other people can suffer from this too. Certain risk factors can favor the appearance of the disorder. Smokers have a high probability of developing nodules because nicotine acts as an irritant to the vocal cords. Similarly, gastroesophageal reflux is an illness that can damage the same area of the larynx. The acid in the stomach moves to the airway, eroding the mucous membranes present there.

Fortunately, these nodules are always benign. This means that it can’t evolve into a malignant disease such as cancer of the larynx. This allows a conservative approach at the beginning, with anti-inflammatory drugs and voice re-education. Speech therapists typically carry out this therapy.

If the nodule is quite large and doesn’t respond well to conservative measures, or if there don’t seem to be too many possibilities for improvement, then doctors may choose to carry out surgery. Afterward, the patient will need rehabilitation.

The inflammation of the larynx from different causes is known as laryngitis. Although the term refers to an accumulation of inflammatory fluid throughout the structure of the organ, it always affects the vocal cords the most.

Along with the change of voice, there’s usually a dry, irritative cough caused by the lack of glands in the larynx. Since it can’t be lubricated, the body doesn’t produce the necessary mucus to expel the irritating agent, be it a microorganism or an inert foreign body.

The causes are almost always infectious, and viruses are usually the culprits. The winter season is the climate prone to most upper respiratory conditions.

Since they’re viral infections, doctors don’t generally recommend antibiotics, unless there’s a bacterial superinfection or if the cause is a microbe that is sensitive to these drugs. The treatment is then simply symptomatic.

Typically, doctors recommend that you rest your voice and take anti-inflammatories to reduce the accumulated liquid inside the larynx tissues, and nebulizers to make the mucus more fluid. Doctors won’t take a culture sample unless they suspect the cause to be bacterial.

Finally, we have polyps. These are very similar to nodules, although not quite the same. In general, they’re protrusions on the vocal cords that stick out and obstruct the space where air should pass.

It’s a common disease of the vocal cords, and doctors will diagnose it when a patient comes to them with voice problems. Loss of voice and a change in tone are particular signs that indicate the need for diagnosis.

They can also appear from the overuse of the voice, which explains why they often go by the name “degenerate polyposis”. This shows that the underlying process is a change in the tissue of the vocal cords, as they tend to protrude outside their corresponding boundaries.

Beyond the physical examination, the specialist may perform a complementary method to confirm the presence of the polyps. This study is the laryngoscopy, performed with a flexible device that they insert through the nose. With the help of its very small light and camera, the specialist can record the current state of the vocal cords.

If you suspect a vocal nodule or polyp, then it’s best to consult an otolaryngologist. This specialist will have all the necessary knowledge to perform the complementary methods that this illness requires. In the case of winter laryngitis with persistent dysphonia, a regular doctor can help. Whatever the case, it’s always best to have a professional evaluation before starting to self-medicate.

Four Natural Remedies for Laryngitis
Laryngitis is characterized by causing hoarseness, sore throat, and dry cough. It's normally caused by inflammation of the vocal cords or infections. Can you fight it with natural remedies? Find out in this article! Read more »
Link copied!
Interesting Articles
Illnesses
Hepatitis in Children: What You Need to Know