Swollen vocal cords cause voice alterations and pain. Sometimes, it’s infectious in origin, while other times, it’s the result of vocal overstrain. How is it treated? We'll tell you here! 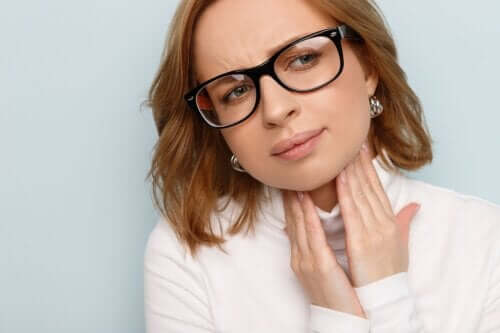 When you have swollen vocal cords, your voice sounds strange and a particular discomfort in your neck usually warns you that something is wrong. During the winter, people associate this with going out in the cold and temperature changes. However, occupational diseases can also lead to this disorder.

The vocal cords are very small muscles that are located in the larynx. Air passes through there so you can be able to articulate your voice, due to the vibrations that these fibers experience. Inflammatory fluid build-up in the area causes voice alterations.

The causes of swollen vocal cords

Vocal cords can become inflamed due to a virus or as a consequence of a growth process on their surface. Thus, the causes can be infectious or non-infectious.

Among the infectious agents, we have viruses and bacteria. Infectious laryngitis peaks in the fall and winter, when low temperatures favor the spread of viral particles and microorganisms that colonize the larynx.

To defend itself, the immune system mobilizes white blood cells and immunoglobulins to the area, which increases the flow of fluids. This makes the vocal cords collapse, as they’re very thin. Thus, the process affects their functionality.

Infectious laryngitis can last up to three weeks, often without the presence of the initial causative agent. This is because the immune reaction prolongs in time and the swelling persists, despite the absence of what originally caused it.

At the other end of the spectrum, non-infectious forms of laryngitis have mostly work-related origins. Teachers, professors, singers, and speakers know very well that not taking care of their voice or straining it can lead to the appearance of nodules and polyps. Swollen vocal cords in the workplace are an object of study for forensic medicine. They’re considered a consequence of the lack of prevention in workspaces, particularly in schools.

Excessive and prolonged use, without hydration and at high levels, causes the small muscles of the larynx to build up fluid by rubbing against each other. If this happens frequently, the result may become chronic.

The symptoms of laryngitis

When it comes to laryngitis or swollen vocal cords, the first symptom is vocal alterations. However, as you’ll see below, it isn’t the only sign of the problem.

There are different types of voice alterations. Some people’s voice weakens. In fact, they can’t scream nor try to increase their pitch. Others completely lose their voice, which is medically known as aphonia.

Pain is also common. Sometimes, this pain is confused with pharyngitis or with a difficulty swallowing that’s mistakenly associated with the esophagus. Laryngitis often causes continuous discomfort, which makes it hard for the affected person to rest and sleep.

In fac,t it may be so much so that snoring is part of the clinical picture of swollen vocal cords. This becomes more evident in people who are overweight. Thus, when they’re horizontal, the weight of their neck puts more pressure on the larynx and interrupts the passage of air.

Finally, it’s important to note that vocal cord paralysis due to inflammation is the most serious form of the disorder. Since the vocal cords are muscles, excessive strain can wear them out. They can even lose their characteristic muscle tone.

How to treat swollen vocal cords

The treatment of this disorder will depend on the cause. Viral laryngitis isn’t the same as a polyp on the vocal cords due to an occupational disease. Similarly, the long-term treatment of chronic dysphonia is different than that of aphonia due to an infection that will resolve itself in a few days.

Below, we’ll analyze what can be done to treat the most common forms:

When to consult your doctor

The vocal cords are delicate. Meanwhlie, it’s essential for you to take care of them, because your voice allows you to communicate with others.

Thus, you should see a doctor if you’re suffering from dysphonia, aphonia, or sore throat. If it’s viral laryngitis, your doctor will indicate conservative treatments and rest. If the otolaryngologist suspects nodules or polyps, they’ll perform an invasive procedure to see what’s happening inside. It’s quick and will help them diagnose you.

Either way, it’s crucial to see a doctor as soon as possible to find the correct treatment.

Causes and Symptoms of Laryngitis
Laryngitis is a pathology that has multiple causes. In this article, discover the causes and symptoms of laryngitis. Read on! Read more »
Link copied!
Interesting Articles
Illnesses
Nipple Discharge: Causes and Recommendations