Causes and Symptoms of Laryngitis

Laryngitis is a pathology that has multiple causes. In this article, discover the causes and symptoms of laryngitis. 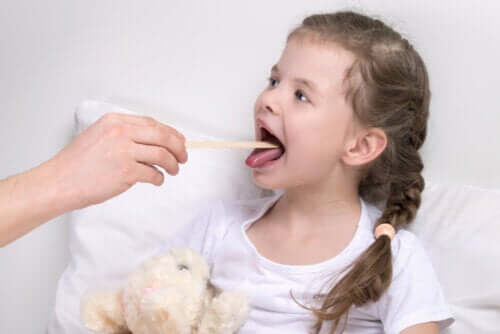 Laryngitis is an inflammation of the laryngeal mucosa, the organ responsible for allowing inhaled and exhaled air to pass. It’s the most important area for phonation, because the vocal cords are located there. So, what are the symptoms of laryngitis?

According to experts from the Spanish Society of Otorhinolaryngology (SEORL), this pathology is considered acute if the patient recovers after a short period of time (hours or days). If the symptoms last for more than three weeks, the case is chronic.

As you’ll see in this article, laryngitis is a very common disease that’s usually caused by a virus. That’s why knowing the causes and symptoms of laryngitis is essential. Below, we’ll tell you everything you need to know about it.

Prevalence of the disease in the general population

It’s essential to know the epidemiology of laryngitis, that is, who it affects and its prevalence (number of infected people in a given population), to be able to address it. Epidemiological studies provide a series of very interesting data:

As you’ve seen, this is a disease that predominates in children’s environments. This is due to the fact that, up to six years of age, young children have a higher glottis and looser and less fibrous submucosal tissues, factors that predispose them to infection.

This article may interest you: Four Natural Remedies for Laryngitis

The causes and symptoms of laryngitis

Scientific research states that various causes can produce laryngitis in the population. They’re the following:

According to several studies, parainfluenza viruses 1, 2, and 3 cause 65% of all cases. Also, influenza A and B viruses (which cause the flu) and several types of adenoviruses are common causative agents.

These pathogens are associated with upper respiratory infections, leading to typical clinical manifestations of influenza. Some of them are:

These symptoms stem from the inflammation of the pharyngeal mucosa, which is red and edematous, in other words, with built-up extracellular fluid. Regarding treatment, the patient should rest their voice and apply antipyretics and analgesics.

In acute cases, this disease solves on its own. In fact, it disappears after a few days. The immune system fights the causative agent and it doesn’t leave lasting effects.

It’s less common than viral laryngitis. According to various bibliographic sources, this variant is also self-resolving and quick to cure.

One of the most common causative agents is Mycoplasma bacteria, of which there are more than 100 different species. The symptoms are very similar to those we mentioned above: fever, nonproductive cough, painful swallowing, and dysphonia (alteration of some of the acoustic qualities of the voice).

In these cases, the treatment is based on antibiotics. Erythromycin, clarithromycin, or azithromycin are effective at killing bacteria in the larynx.

Some cases of this disease aren’t pathogenic, meaning that the laryngitis wasn’t caused by microorganisms but due to use and the environment that surrounds the person:

To know more, you should read: How to Cure a Sore Throat with Warm Water and Honey

What to remember about the causes and symptoms of laryngitis

In this article, we explained that laryngitis is a multifaceted pathology, since it has various causes that range from infectious agents to simple injuries. Nevertheless, they all cause common symptoms, such as dysphonia and nonproductive cough.

Due to the fact that infectious variants are the most common, they’re transmitted between population sectors by direct contact or fluid inhalation. Therefore, they manifest with certain epidemiological patterns, peaking during the winter and fall.

These respiratory pathologies are quite common in infants. However, there’s no need to worry, as they usually resolve on their own. But if the symptoms last for more than two weeks, it’s essential that you go see a doctor.

Does Your Kid Have Trouble Breathing? 6 Tips
Regardless of whether your child's condition is acute or not, you should consult a pediatrician so that they can determine what's causing the issue. In addition, if you take some tips into account, you can improve their condition as soon as you notice a problem. Read more »
Link copied!
Interesting Articles
Illnesses
Cervical Insufficiency: Symptoms and Complications