The Uses, Types, and Benefits of Thalassotherapy

Want to learn about the uses, types, and benefits of thalassotherapy? This technique uses elements of the marine environment (seawater, algae, sand, mud) to improve people's health. Its effectiveness has been proven and recommended. 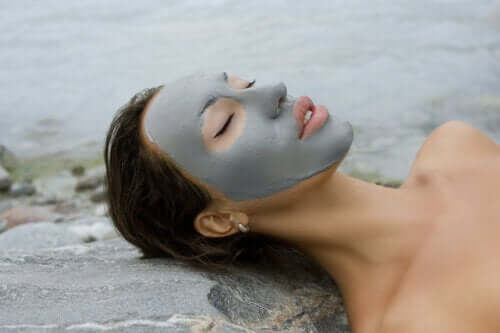 Thalassotherapy consists of the therapeutic use of seawater and other elements of the marine environment, such as algae, sand, mud, or the breeze itself.

The word comes from the union of the Greek word thalassa, which means ‘sea’, and therapia, which refers to ‘cure’.

Today, we’ll tell you about the uses, types, and benefits of thalassotherapy.

The origins of thalassotherapy

The origins of this therapy date back to ancient Greece, in the writings of Hippocrates, who recommended the use of seawater to alleviate certain ailments. Later, in the Roman Empire, soldiers used hot seawater baths to recover from battles.

This therapeutic technique spread throughout Europe, especially in Italy, England, and France. However, at the beginning of the 20th century, its usefulness was studied and the first official thalassotherapy center was established: The Rochroum Marine Institute, located in France.

The principle behind thalassotherapy is that repeated immersion in warm seawater and application of sea mud and algae could contribute to the body’s natural chemical balance. This could be because the skin can absorb the minerals it needs (magnesium, potassium, calcium, sodium, and iodine).

This treatment also assumes that seawater contains substances similar to blood plasma. In fact, in marine liquid, there’s a greater amount of sodium chloride, magnesium chloride, potassium, and other elements. So, this similarity could favor the absorption of the substances through the body, as a way of maintaining homeostasis.

To guarantee the success of this technique, the place must have the necessary hygienic measures and specialized personnel. For this, the collection must take place far from the seashore. Then, it must go through a purification and sterilization process.

It can also be helpful in cases of circulation problems, such as hematomas, varicose veins, and recurrent nosebleeds. It can also provide benefits for those with emotional conditions having to do with stress and depression.

On the other hand, this therapeutic technique isn’t recommended in cases of cancer, severe hypertension, feverish conditions, and psychosis.

Thalassotherapy includes a series of therapeutic techniques that take advantage of the properties of marine elements to improve health and physical appearance. There are several methods of application and we’ll tell you about them below.

This consists of the use of fresh or dried seaweed. It’s usually added to warm seawater baths or applied as thin wraps on the skin.

Seaweed is rich in minerals, proteins, and minerals. It has a revitalizing, antioxidant, and disinfectant action. Also, it helps to tone muscles, drain fluids, and help in the treatment of skin problems.

Marina climatotherapy takes advantage of the properties of the marine environment, which is rich in iodine, ozone, and minerals. This could help the respiratory system and the skin. Also, sea air has relaxing effects to calm and improve mood disorders.

Hydrocynsnotherapy consists of performing therapeutic exercises in seawater, especially in a pool designed for this purpose. It usually focuses on the treatment of physical ailments.

This consists of covering the body with hot sand. The purpose is to alleviate joint or muscle conditions, providing heat to the affected area of the body. Also, the trace elements and sea salts in the sand benefit the muscular and skeletal structure.

This involves the use of peloids, such as marine mud, algae, clay, and limestone. These elements are rich in minerals, vitamins, and proteins.

The main benefits of thalassotherapy

So far, we’ve delved into the properties and forms of thalassotherapy. But what does the scientific evidence say about its benefits? Let’s see.

There’s evidence to suggest that thalassotherapy has a positive effect on fatigue and recovery from muscle damage. This contributes to improving the health and quality of life of those suffering from these conditions.

In turn, research has shown that seawater aerobic exercises provide more advantages than other modalities. They cause an improvement in the emotional state of patients.

Seawater therapy improves blood circulation, which in turn, helps to relieve muscle spasms and replenish the body with oxygen and nutrients.

At the same time, a study showed that algae used in thalassotherapy improve circulation when applied in cosmetics.

Another benefit is the relief of joint pain and increased movement in the joints. In fact, there’s evidence that aquatic treatment, including thalassotherapy, improves the function of the joints between bones. It also increases relaxation and promotes a positive mood.

Thalassotherapy also contributes to the relief of several skin conditions. In fact, the minerals and trace elements present in the marine environment provide the necessary substances to soothe skin irritation (in cases of psoriasis and dermatitis) or accelerate wound healing.

Consult a professional before doing thalassotherapy

If you suffer from any condition and wish to try out the benefits of thalassotherapy for yourself, it’s best to first consult a health specialist. They’ll know how to give you the appropriate orientations and indications according to your case.

Remember that there are contraindications. Also, make sure you go to specialized centers that guarantee hygiene and procedures.

However, if you don’t suffer from a serious condition and wish to benefit from the marine environment, all you have to do is take a trip to the beach, breathe in the air, and relax. In these cases, don’t forget to use good sunscreen!

Myths and Interesting Facts about Sunscreen
It's important to protect your skin from damage caused by ultraviolet radiation. Do you want to find out the myths that surround sunscreen? Read more »
Link copied!
Interesting Articles
Natural therapies
Essential Oils For Winter Illnesses

Natural therapies
What Are the Benefits of Balneotherapy?

Balneotherapy is a type of alternative therapy that has gained a great deal of popularity in recent years. In fact,…

A burning sensation in the chest or throat occurs when acid returns into the esophagus. Poor diet, stress, exercise, or…

Natural therapies
5 Relaxing Treatments for Torticollis, or a Stiff Neck

Poor posture, sudden movements, and overexertion often trigger cervical injuries such as torticollis. This condition is an involuntary contracture of…

It's important to include foods that promote a healthy intestinal microbiota in your diet every day. In that sense, some…