The Properties of Black Fungus and Its Applications

The consumption of black fungus seemingly decreases the risk of complex diseases due to its antioxidant capacity. In addition, it contains fiber, which is great for digestion. 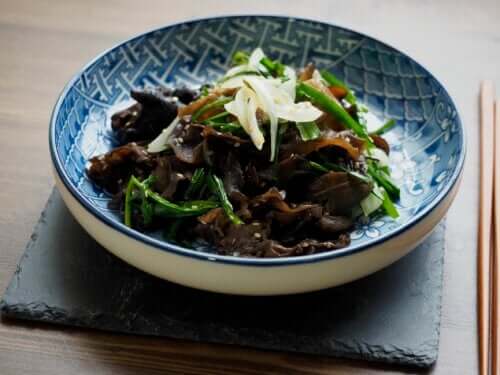 Black fungus grows naturally in tropical climates. It’s common in India and some Pacific islands and mainly found on the trunks of fallen trees. However, it wasn’t until recent years that people began to cultivate it.

These fungi have many health properties so they’re recommended in the context of a healthy diet. We’re going to tell you everything you need to know about this mushroom so you can take advantage of its benefits.

This mushroom is low in calories as it only contains 20 kcal/100 grams (4 oz). It provides some carbohydrates and a practically negligible percentage of proteins and fats. However, it stands out for its concentration of fiber.

From the point of view of micronutrients, it’s a high source of sodium, potassium, calcium, and phosphorus content. However, its most outstanding feature is the presence of antioxidant phytonutrients.

Learn about The Top Five Medicinal Mushrooms Backed by Science

The black fungus is often used for sauces. You can also add it to soups and broths in order to improve its organoleptic properties.

In addition, it’s great for stews as it increases the flavor of meats.

The consumption of black fungus can bring a number of health benefits. We’re going to explain them to you and point out whether or not these properties have scientific support.

Edible plants usually contain phytonutrients with antioxidant capacity. The black fungus grows on plants, so it’s no exception and has a series of pigments responsible for its color. We know them as anthocyanins.

There’s evidence that these compounds can neutralize the formation of free radicals and thus reduce the risk of developing complex diseases. Furthermore, they can delay the onset of premature aging.

Find out What’s Kombucha, How to Make It, and What’s It For?

It might improve the functioning of the immune system

The black fungus contains a significant amount of prebiotic compounds. These are nothing more than soluble fiber that ferments at an intestinal level. It promotes the growth of good gut microbiota.

Then, there would be a noticeable improvement in the functioning of the immune system, according to a study published in Immunology and Cell Biology. This is because the relationship between the body’s defenses and the quality of the microbiota is a close one. The latter act as a barrier against pathogenic microorganisms.

This is the most controversial claim. However, there’s some evidence related to the continuous supply of antioxidants that seemingly promote liver health. This is because antioxidants help modulate inflammation and neutralize waste compounds produced by the liver, thus facilitating their elimination.

Currently, there are no known side effects of black fungus so it’s a safe product and its commercialization is legal in all countries.

Keep in mind that you must wash and cook them properly prior to eating them in order to eliminate any bacteria or dirt present. It’s the best way to avoid health risks.

Ways to prepare it

As mentioned above, the best way to fix the black fungus is by cutting it into small pieces and adding it to sauces, rice, broths, and soups. It provides a good amount of flavor and color and improves the organoleptic characteristics of any dish.

It’s possible to buy it in its dehydrated version. Be sure to soak it first before cooking, unless you’re adding it to a soup or a stew.

The black fungus is a great addition to any diet

As you can see, the black fungus is great for your health but isn’t common in many countries. You can find it in many Eastern and Asian dishes though.

The most common format in Western countries is either canned or dehydrated. This is because these processes increase the shelf life of the fungus without altering its organoleptic characteristics too much. We encourage you to add it to your meals, it’ll provide a different touch and a significant amount of antioxidants.

Growing Mushrooms at Home
Believe it or not, growing mushrooms at home is quite easy. And the best part is that you can pick them and eat them, and they'll always grow back. Read more »
Link copied!
Interesting Articles
Medicinal plants
The Characteristics of Moringa Oil and Its Uses