The Fear of Abandonment in Romantic Relationships

Fear of abandonment in couples is a rather characteristic behavioral pattern of people with emotional dependence. Today's article will discuss the expression of this dependence in a relationship and its consequences. 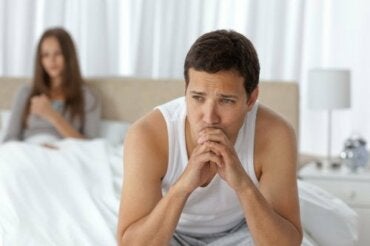 Fear of abandonment in a romantic relationship is a common cause of distress and uneasiness in a large part of the population. In fact, it’s an emotion that affects many couples. One that hides emotional dependence – an increasingly relevant and psychological problem in romantic relationships.

The need for social relationships and bonding with others is inherent to human beings. We all need to satisfy it in a healthy way as it’s of vital importance to achieve a strong identity. It increases our ability to trust others and strengthens our self-confidence. It also decreases our tendency to be too upset about a hypothetical rejection or abandonment (Bornstein, Geiselman, Eisenhart, and Languirand, 2002).

However, all relationships lose their healthy condition and acquire a negative character when this need becomes exorbitant and absolute. This exaggerated need for bonding is what leads to the fear of abandonment. It’s an uncontrollable fear due to a distancing that always seems imminent.

Authors such as Urbiola and collaborators (2017) define people with emotional dependence as:

Fear of abandonment in a romantic relationship

This fear is the foundation upon which a person builds emotional dependence and all the behavioral expressions that come out of it. It’s so intense that it makes the relationship difficult for both parties. This is because the person with an excessive fear of abandonment suffocates their partner so as to ensure they won’t leave.

You may be interested in Codependent Relationships: Bonds that Hurt

Some of these types of behavior are about controlling what happens around them. This is because these people can’t tolerate ambivalence. Thus, the dependent person smothers their partner with behavior such as constantly checking their social networks and text messages.

They want to know who their partner is with and who they talk to at every moment. They also demand immediate responses to their own messages.

At the same time, they believe the absence of sweet messages from their lover is synonymous with a lack of love. This is why they need constant reassurance that their partner’s feelings haven’t changed. They often ask if they’re loved and liked.

They want to know if they’re boring and if their partner is looking for someone else, if they still love them, etc. Whatever the answers to these questions, it won’t keep them from asking the same questions again in the near future.

In the same line, people with a fear of abandonment and thus, emotionally dependent, never want to be alone or feel lonely. They usually avoid any situation where they might feel that abandonment. It’s precisely for this reason that they’re so restrictive.

Let’s not forget they tend to have a negative self-image and low self-esteem. They imagine the threat of abandonment in every situation, with every person, at every moment.

A desire for exclusivity

A person with low self-esteem doesn’t allow themselves to be intransigent and violent in their requests. This is because they don’t want to lose their partner. Thus, they’re not usually imposing, only emotionally vulnerable. Thus, they probably won’t try to keep their partner from going out with their friends.

However, they’ll definitely call them ten times a day in a bad mood and will experience serious feelings of anxiety over the fear of abandonment, a possible break-up, or loneliness during the days prior to the outing. This can lead to their partner no longer making those plans as they feel guilty about the emotional consequences in their other half.

The deterioration of a relationship due to fear of abandonment

Needless to say, the outcome is dire after dealing with the behavioral, cognitive, and emotional components that arise from the fear of abandonment in a partner. There’s usually a clear deterioration and the relationship becomes toxic or at least unbalanced.

Living with an emotionally dependent person often means having to pay a toll that never stops. In fact, it demands more and more as time goes by.

An emotionally dependent person can exhaust anyone’s patience by having to submit to their demands. Living under such a yoke isn’t good for anyone. This is because the desire to please and satisfy their partner makes them seek certain types of negative behavior.

A person may get used to putting the dependent person first. Thus, it’s difficult for the other not to expect to be put first when the foundations of the relationship have been built on such emotional dependence. Thus, they end up participating in the emotional dependence of their partner. As a result, the fear of abandonment becomes an illness in one and profitable in the other.

Domestic violence is a consequence of fear of abandonment

According to the Andalusian Institute of Sexology and Psychology, in Spain, 49% of people interviewed were emotionally dependent. 8% in its most clinically significant version. Most of the individuals in this group were women.

What’s particularly disturbing about this information is that it shows an incidence of 24% in young people ranging from 16 to 31 years old. In addition, 74 percent are women, and 26 percent of them are men. No doubt the data suggest this is a real problem in the young population. Therefore, it’s essential to develop programs aimed at young people in order to promote their mental health.

The above is relevant, for example, authors such as Amor and Echeburua (2010) learned that emotional dependence is an emotional characteristic of women vulnerable to male violence.

This is a problem one usually hears about in the news, especially when related to violence in interpersonal relationships and abuse. The reports indicate that 25% of girls between 16 and 19 years of age have already been in a controlling relationship.

Others assure that the increase in cases of emotional dependence in young people is quickly developing to concerning degrees. Yes, there are campaigns and intervention programs to work with the emotionally dependent population. However, there are hardly any prevention plans.

Prevention plans for emotional dependence and fear of abandonment

Research suggests we can prevent, train, and improve a number of risk factors and characteristics of people with emotional dependence, beginning at an early age. This is all in response to this epidemic in young people who are beginning to date. Some of these factors are:

Prevention plans are put forward as weapons not to accept the behavior from those with fear of abandonment and emotional dependence; as well as to not be emotionally dependent on anyone.

The Reasons for a Distant Lover
Your partner has been acting more distant lately....Is something wrong? Was it something you did? Today, we'll give you some clues about the reasons why this kind of behavior occurs and what you can do if you find yourself in this uncomfortable situation. Read more »
Link copied! Next
Interesting Articles
Conflicts
How to Help a Woman who Has Been Abused