The Diseases Vitamin Deficiencies Can Cause

Vitamins are necessary compounds for bodily functions. Thus, deficiencies can lead to diseases. In this article, we’ll tell you all about some of the diseases vitamin deficiencies can cause. 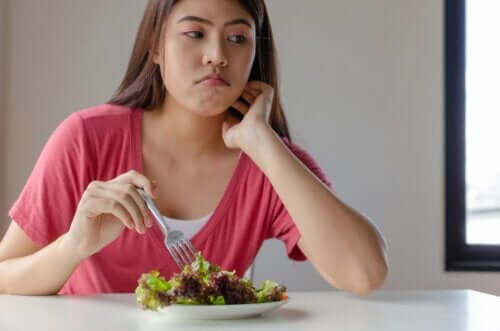 A lack of adequate nutrition can lead to diseases that vitamin deficiencies cause. This is because vitamins are essential micronutrients that are present in many different foods that people regularly consume, albeit in small amounts.

Until a few years ago, experts talked about the consequences of not consuming certain foods. However, they later discovered that, in reality, to stay healthy, the important thing was the type of substances they contained. What if you don’t get enough vitamins?

Diseases vitamin deficiencies can cause

There are thirteen types of vitamins in total. All of these correspond to a group of organic compounds that act along with enzymes and that are part of the body’s metabolic processes. Although they’re considered micronutrients, they’re a vital part of our diet.

When a vitamin deficiency is sustained in the medium or long term, the probability of developing certain diseases increases. Which ones? Below, we’ll detail the most relevant ones.

Visual disturbances and vitamin A

Vitamin A deficiency is related to visual problems. In particular, it causes dry eyes or xerophthalmia, which could progress to night blindness over time.

Thus, to avoid these complications, you must eat foods that contain it, such as carotenoids. You can usually get vitamin A from foods such as:

The recommended daily amount of vitamin A depends on age and gender. According to the National Institute of Health, the values for adults are 900 micrograms for men and 700 for women.

Anemia and vitamin B12 deficiency

A vitamin B12 or cobalamin deficiency causes a type of anemia called pernicious anemia. This substance contains cobalt, a necessary mineral for the production of red blood cells.

As cobalt is only synthesized by bacteria, the contribution in humans is determined by the consumption of foods of animal origin. Thus, people who follow a vegan or vegetarian diet can suffer from this problem.

According to entities such as the National Institutes of Health (NIH), the average daily recommended amounts of cobalamin for adults is 2.4 micrograms per day. People can obtain this amount with supplements, especially those who follow diets based on plant-based foods.

You should also read: The Benefits of Spirulina: A Surprising Food You Probably Didn’t Know About

In its early stages, vitamin C deficiency can lead to bleeding gums and slow healing of wounds. However, many years ago, experts discovered that, in prolonged periods, it causes a pathology called scurvy.

In addition to the symptoms we mentioned, this condition causes fatigue, joint pain, and skin lesions. According to the Food and Agriculture Organization of the United Nations (FAO), it’s become less usual ever since experts discovered the importance of this nutrient.

Some foods that contain vitamin C are citrus fruits, kiwi, and peppers. However, you must remember that cooking processes or exposure to summer temperatures can lead to a loss of this vitamin. A safe option to supplement your diet is taking supplements.

Several studies have suggested that the intake of folic acid (vitamin B9) by pregnant women prevents neurological disorders in the fetus. Additionally, supplementation seems to have other beneficial effects, such as the prevention of congenital heart disease and oral clefts.

The main food sources of folic acid are dark green leaves, liver, and kidney. According to the World Health Organization, all women, from the moment they begin trying to conceive until 12 weeks of gestation, should take 400 μg of folic acid a day.

This article may interest you: 5 Ways To Increase Folic Acid Intake During Pregnancy

One of the functions of vitamin D is to keep bones healthy through proper calcium absorption. Diseases such as rickets and osteomalacia may appear if you aren’t getting enough vitamin D.

In humans, this vitamin is formed when the skin is exposed to the ultraviolet rays of sunlight. Similarly, you can get if from foods of animal origin, such as eggs, milk, and meats, although only about 10%.

What to remember about the diseases vitamin deficiencies causes

In short, if you eat a balanced diet, it’s unlikely that you’ll suffer from a vitamin deficiency. However, there may be situations in which the daily recommendations should increase, such as during pregnancy or if you’re suffering from an illness or disorder.

If this is your case, it’s important to adjust your diet, as a lack of these micronutrients can lead to health problems. To do this, it’s advisable to consult a nutritionist to evaluate the possibility of resorting to supplementation.

The Risks of a Vitamin Deficiency
A balanced diet provides your body with the amount of energy it needs to function. There are many risks associated with vitamin deficiency. Read more »
Link copied!
Interesting Articles
Nutrition
5 "Healthy" Snacks that are Actually Ultra-Processed