The Different Types of Craving

Most people who smoke experience the constant craving or desire to consume tobacco later on. However, this problem goes beyond that. What should you know about it? 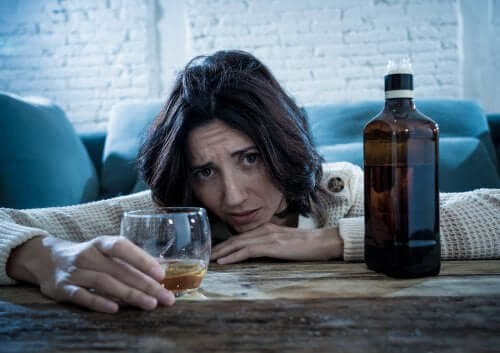 Craving is a relatively recent concept that refers to the intense and almost unstoppable desire to consume a substance (drugs, tobacco, food, or alcohol). We’ll look at the different types of craving in this article.

The first time this concept was used was approximately in the 1940s. At that time, experts defined it as an intense urge to consume opiates, such as heroin or morphine, when a person is trying to come off them.

However, nowadays, it still seems difficult to specifically define this situation. What’s clear is that craving is a fundamental aspect of drug addiction, which is closely related to relapses.

Therefore, in this article, we explain everything you need to know about this problem.

As we already mentioned, craving is the urge to consume a substance. This desire is an unstoppable urge that “takes hold” of the person in a sense. However, it isn’t the same as withdrawal syndrome.

Withdrawal syndrome comprises a series of both physical and psychological symptoms that manifest after a person stops consuming a substance they’re addicted to (a drug). It’s likely to occur in alcoholics or people addicted to drugs such as heroin.

However, to differentiate them, you must understand that cravings may appear even after a person overcomes the symptoms of withdrawal syndrome. This is because the desire to consume a substance can remain for months or years.

Experts associate craving with many different types of substances. It ranges from the desire to smoke or drink alcohol, even the fact of wanting to consume cocaine or strong opioids such as heroin again.

You need to be aware of the fact that something that has been socially accepted – tobacco consumption – can condition you for life. In other words, it’s equally as severe and harmful as the others.

Craving is the urge to consume any substance, which may be drugs, alcohol, or tobacco.

Are there different types of craving?

Some scientists claim that there are two different types of craving. The first is physical, which occurs almost parallel to withdrawal syndrome. Like this syndrome, it produces physical symptoms such as tachycardia, cold sweats, and even seizures.

In other words, this first type is a desire to consume the drug, driven by the strong symptoms they experience during withdrawal. This type is usually the one people have the hardest time facing and handling.

The other type is psychological craving. It appears later, once the person overcomes withdrawal syndrome. It occurs when the patient hasn’t consumed the substance for a while, maybe even months or years.

This article may interest you: How to Know if You’re Addicted to Alcoholic Beverages

How to treat craving

Ultimately, you must understand that both addiction and withdrawal syndrome or craving are situations that can be treated. To do this, it’s best to always turn to a specialist, a psychologist who can help you manage it, or even support groups.

Craving is one of the aspects that has an impact on people’s relapses. In the same way, it’s the factor that usually causes the addiction to be maintained. Therefore, it’s important to know about it and handle it.

To handle craving, it’s necessary to identify the situations that are associated with the consumption pattern of the substance. The first step is to avoid the substances completely.

The idea is to try to avoid situations that are associated with the consumption of that substance. For example, if you’re an alcoholic, it’s best to reduce your nights out or visits to bars.

In addition, it’s important to have the tools to control this automatic behavior of consuming the substance. The patient’s psychological or emotional situation can also have an impact, since it’s always easier to relapse when they’re vulnerable or sad.

In this sense, most therapies focus on teaching these people how to manage stress or self-esteem. In the same way, another effective way to control it is to focus their attention on other activities, such as exercise.

You may like this article: Five Positive Changes You’ll Notice after You Quit Smoking

Craving is a person’s irrational and imperious desire to consume a drug or substance they’re addicted to. It’s important to know that it doesn’t only appear with drugs such as heroin; tobacco or alcohol can produce it as well.

Nicotine Gum: What it Is and How to Use It
When you consume nicotine gum, you should chew it gently and slowly for about 5 to 10 times. In this article, learn more about nicotine gum and how to use it to quit smoking. Read more »
Link copied!
Interesting Articles
Anatomy and physiology
Why Are Some People More Sensitive to Pain than Others?