The Differences Between a CT Scan and an MRI

One of the most important differences between a CT scan and an MRI is the imaging method. A CT scan uses X-rays while an MRI requires magnetism. Learn more in this article! 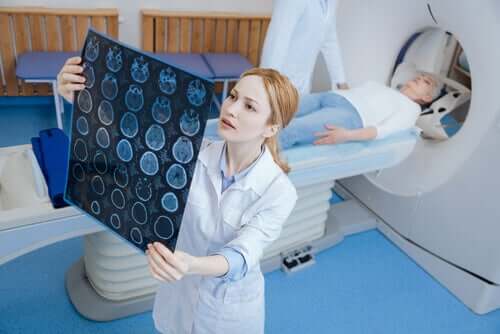 The differences between a CT scan and an MRI are technical in nature. This is because they require different methods to capture the images. They also give different results so doctors use one or the other depending on what they’re looking for. As you can see, each procedure is different.

Indeed the differences between a CT scan and MRI are many; although, they also have many similarities. For one, they’re both diagnostic tests that make use of imaging technology. Likewise, both are noninvasive examinations to explore, detect, or rule out diseases.

The physician may request one or the other according to their patient’s condition. Both tests have limits, contraindications to take into account. In any case, both tests are safe and very effective despite their differences.

One of the first noticeable differences between a CT scan and an MRI is the equipment used for each test. The CT scan requires a scanner that uses the same technology as the traditional X-rays. It’s basically about taking multiple pictures of the inside of the body.

The machine takes photographs from different angles, and then a computer assembles the images to see a certain area of the body in a three-dimensional simulation. The CT scan is similar to X-rays, only much more detailed.

The radiation generated by the scanner makes soft tissues more visible than solid tissues. Soft tissues are all those that aren’t bone such as organs, muscles, ligaments, and vessels, among others.

Thus, the soft tissues appear lighter while the denser ones are darker. The ionizing radiation produced by a CT scan is minimal and therefore doesn’t affect a person’s health. However, this method shouldn’t be abused.

An MRI obtains images differently than a CT scan. It uses magnetic fields, magnets, and radio waves. It does it using a complex system of operation that allows obtaining contrasted images. That is to say, more detailed images of the soft tissues.

For instance, magnetic resonance imaging takes pictures from any point of view and in two or three dimensions. The images of the soft tissues appear sharp so the most minimal details are visible. This doesn’t happen with other similar procedures.

As you well know, one cannot detect many types of body problems with the naked eye and these are only visible in those images obtained in the three planes of space — horizontal, coronal, and sagittal. Likewise, MRI is highly sensitive to the movement of fluids and this makes it possible to perform some tests without using any contrast substance.

Find out What’s the Purpose of a CT Scan?

Differences between a CT scan and an MRI

As you can see, there are several differences between a CT scan and an MRI. The first of these are the types of equipment used. There’s a ring in a CT scan and the bed goes from one side of the ring to the other during the test. In MRIs, the bed is placed entirely inside a tube during the entire examination.

Other differences between a CT scan and an MRI are:

A CT scan isn’t suitable for pregnant women, patients with renal insufficiency, and those who are allergic to the contrast material used in some of these procedures.

Furthermore, doctors don’t perform MRIs on patients with metallic implants, prostheses of this material, or some types of pacemakers.

Parts of the Brain and Their Functions
The parts of the brain and its functions have gradually become known and deciphered, but there are still many enigmas surrounding them. Read more »

Link copied!
Interesting Articles
Treatments
What is a Bone Densitometry?