The Causes of Renal Colic during Pregnancy

The changes a woman's body undergoes during pregnancy make it easier for abdominal pain and renal colic to appear. 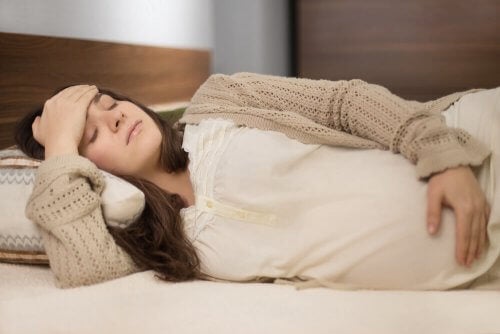 Renal colic during pregnancy can be due to several things. Thus, you must pay attention to the intensity of the pain and other possible symptoms you might experience. It’s always best to consult your doctor so they can conduct the appropriate tests and give you a diagnosis.

In this article, we’ll review the causes of renal colic during pregnancy, both the most common and serious ones. The latter can indicate anything from ectopic pregnancy to premature delivery.

The causes of renal colic during pregnancy

1. Implantation of the embryo

For starters, one of the early signs of pregnancy is renal colic, which can cause the embryo to implant in the uterus. This type of pain usually lasts from one to two days and is similar to menstrual pain.

These kinds of colics can appear in the lower part of the belly way before the time in which the period should have been there. However, they might repeat as the baby grows due to the pressure it exerts on the uterus.

2. Gas and constipation are both symptoms of renal colic


The physiological changes that occur during pregnancy often affect the digestive rhythm, which causes cramps and abdominal pain.

Many physiological changes occur during pregnancy, including slower digestion. This causes swelling and gas accumulation, which can affect a type of colic that isn’t serious.

Also, the intestines move upward as the uterus increases in size during pregnancy. This slows intestinal transit and may also cause pain.

Braxton Hicks contractions are frequent in many pregnant women, especially in the second and third trimesters. They’re sporadic and aren’t indicative of an impending delivery, but rather of preparation of the body for when the time comes.

These types of contractions are uncomfortable but painless, although they can intensify as the due date approaches. We can recognize them because they’re irregular and infrequent.

As we discussed in the first point, renal colic during pregnancy between weeks 16 and 20 can be due to the pressure of the baby on muscles and ligaments. Specifically, cramps in the round ligament, which is responsible for supporting the uterus.

More than 70% of pregnant women experience this type of sharp, stabbing pain in the lower abdomen. However, it’s usually a mild discomfort that lasts a few seconds or minutes without risk to the baby in most cases.

Sexual intercourse is safe in most cases. However, the doctor may recommend abstaining from it in high-risk pregnancies.

There may also be some colic-type discomfort after sex. In general, it’s mild and doesn’t present risks. However, consult your doctor if they become chronic.

Read also: How to Reduce Bone Pain during Pregnancy

In addition to the above causes, which aren’t serious in most cases, there are some that do involve health risks such as:

Now you know the most common causes of renal colic in pregnancy, as well as those with a higher risk. Don’t hesitate to consult your doctor for any symptoms that don’t go away and come with other discomforts.

5 Tips to Fight Sinusitis During Pregnancy
Symptoms of sinusitis include pain around the eyes and nasal congestion. In this article, learn how to fight sinusitis during pregnancy. Read more »
Link copied!
Interesting Articles
Pregnancy
Risks of a High Sugar Diet During Pregnancy