The Causes of Alcoholism: Consequences and Treatment

Alcohol is more damaging and addictive in adolescence than in adulthood. Furthermore, excessive alcohol consumption can lead to long-term physical and psychological issues. 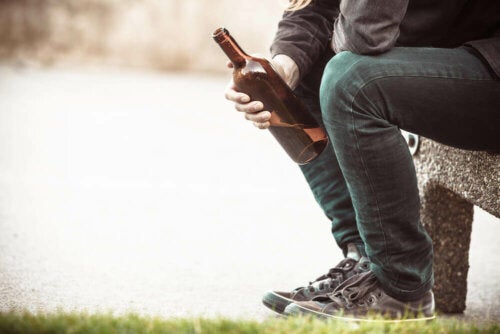 Alcoholism is the excessive consumption of alcohol, where one loses control over how much they drink. Below we’ll explain some of the causes of alcoholism and its effects in further detail.

According to the World Health Organization (WHO), each year alcohol-related deaths account for 3 million deaths globally, which represents 5.3% of all deaths. Additionally, excessive alcohol consumption causes numerous diseases, such as liver cirrhosis. There’s also a relationship between some mental disorders and alcohol.

Alcoholism is a chronic illness, or, in other words, a lifelong addiction. However, this doesn’t mean that it can’t be successfully treated. Additionally, alcoholism is considered to be a progressive and degenerative disease. It can have numerous repercussions on both one’s health and social life.

Alcohol is more damaging and addictive in adolescence than in adulthood. Alcohol addiction can be difficult to overcome and support from loved ones is fundamental in treatment. The first step toward recovery is recognizing the problem.

Read more: My Partner Is an Alcoholic: How Can I Help Them?

What can cause alcoholism?

This doesn’t mean that a person will develop an addiction just because there is alcoholism in their family. There are many possible causes of alcoholism, including:

Drinking alcohol is a generally accepted behavior. This can make it difficult to identify when it’s becoming a problem.

There are certain patterns to indicate addiction, like lying about drinking and drinking in secret. Others might be failing to follow through with personal responsibilities or a decrease in work ethic. It’s also concerning if a person drinks alone or in risky situations.

We can spot physical symptoms, such as changes in weight, increased headaches, and altered speech. Alcoholism can also affect memory and concentration. A person suffering from the disease might even become irritable and aggressive.

What are the consequences of alcohol abuse?

Alcoholism makes up a large percentage of liver disease. Alcohol consumption increases the amount of fat in the liver, which can cause inflammation and, eventually, cirrhosis of liver tissue.

Gastritis, ulcers, and vitamin deficiency are other serious side effects of alcoholism. It can also affect sexual activity, sight, circulation, and more.

What you can do

Alcohol abuse is common in today’s society. And as we’ve seen, the causes of alcoholism can vary between people, and it can affect a person’s social life and mental and physical health.

In fact, alcohol consumption during pregnancy can cause serious harm to the fetus. That’s why it’s important to identify the problem as soon as possible. Talk to your doctor or find a support group if you’re suffering from alcoholism.

Interesting Articles
Medication
The Most Common Myths about Antibiotics