How to Tell a Heart Attack from an Anxiety Attack

At first the symptoms of a heart attack and an anxiety attack may seem the same, but what distinguishes them is how long they last. Learn how to tell them apart in this article. 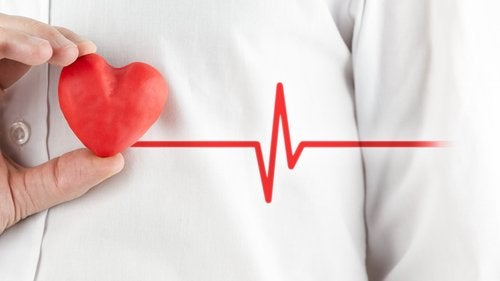 We can often confuse an anxiety attack with a heart attack, as they have very similar symptoms at first glance.

If you’ve ever been in this situation, or if your nerves have ever played tricks on you, take a look at these differences that will help you distinguish which is which.

Heart attacks: what are they?

A heart attack happens when a blood clot in your coronary artery blocks blood flow and oxygen to your heart.

This causes irregular heart beats, or arrhythmia. In turn, this significantly reduces the ability of your heart to pump blood.

If the obstruction is not treated within a short amount of time, it will cause tissue death in the affected cardiac muscle.

Symptoms of a heart attack

People having a heart attack don’t have agitated breathing. Therefore, there are very few cases where it triggers an anxiety attack.

If you see that you have some of these symptoms and it’s been more than five minutes, call an ambulance or get to the emergency room immediately.

Anxiety attacks: what are they?

An anxiety attack, also known as a panic attack, consists of a very intense reaction accompanied by a feeling of having no control over your nerves.

Overall, the key lies in figuring out the kind of thoughts that provoked the attack. These tend to be alarmist and trigger a very quick, general physiological activation.

On the physical level, an anxiety happens when the amygdala is overly activated. This part of the brain goes high alert after perceiving a danger.

To try to solve this problem, you’ll have to find out the motives or reasons behind why this alarm went off when there weren’t any dangerous stimuli.

Whatever the case may be, if you have symptoms like this regularly, it’s best to see a doctor to get a proper diagnosis. Psychological treatment will help you discover the true origin of this disorder.

How Anxiety Affects Your Body Odor

Symptoms of an anxiety attack

When it comes to anxiety attacks, remember that they can happen in the most ordinary and apparently calm moments of your everyday life.

If you have an anxiety attack, seeing a specialist can help you learn to overcome your fears and prevent future attacks.

Anxiety Attacks: Key Points in Calming Down
f you're a nervous person, or if you know someone who experiences anxiety attacks, then pay attention to this article. The following gives key points in helping that person calm down. Read more »