The Symptoms and Treatment of Giardiasis

Giardiasis tends to cause issues like diarrhea, fatigue, nausea, and loss of appetite. Since the treatment of giardiasis depends on proper diagnosis, we want to go over the main characteristics in the following article. 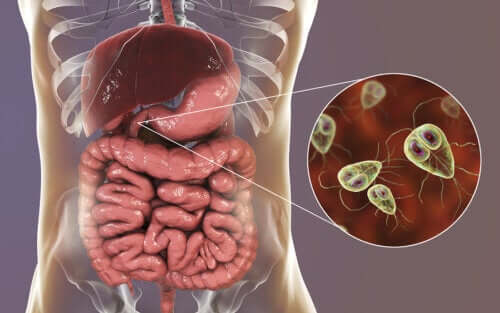 Symptoms like fatigue, nausea, diarrhea, and vomiting can be a sign of a pathology known as giardiasis. This illness leads to intestinal irregularity and is caused by protozoa. According to the Center for Disease Control and Prevention (CDC), it’s more common in warm climates and more prevalent in children. As the treatment of giardiasis depends on proper diagnosis, it’s important to be aware of its characteristics.

Do you know what pathogen causes this infection and how it spreads? Are you aware of the symptoms? Knowing the answers to these questions will help you deal with and avoid this infection. Therefore, we want to use the space below to tell you about the most relevant aspects of giardiasis in humans.

About the Giardia genus

Before talking about the symptoms and treatment of giardiasis, it’s important to understand the pathogen. This is a very particular illness since the pathogen isn’t a virus or bacteria. Rather, it’s a protozoan.

Protozoa are unicellular protists that live in moist or aquatic environments. These microorganisms have a complex morphology and are the size of viruses and bacteria.

We’re talking about the species Giardia lamblia, a flagellated protozoan belonging to the Diplomonadida order. This parasite affects several different mammals, including human beings. To be more specific, it lives in the small intestine, where it causes the above-mentioned illness.

The size of this protozoan is small–less than 20 micrometers. What’s more, it’s interesting to know that it lacks certain organules like mitochondria, which are very important to cellular function in living beings.

The complex life cycle of this parasite

Discover more: Why Do Cases of Salmonellosis Increase in the Summer?

The symptoms and treatment of giardiasis

Humans contract giardiasis by ingesting cysts in contaminated water or foods. Infected individuals expel these cysts with their feces, and the cysts can remain in the environment for a long time.

Therefore, poor cleansing and purifying of water can put an entire population at risk for this illness.

The symptomatology of giardiasis

The symptoms of giardiasis can vary from one patient to another. However, they tend to include the following:

Most of these symptoms are the product of the adhesion of Giardia to the intestinal epithelium. This external pathogen causes a thickening of the microvilli of the intestine. In doing so, it reduces its surface exposure. As a result, it produces various physiological imbalances of varying severity.

The treatment of giardiasis

Some scientific studies indicate that certain strains of Giardia are resistant to the most commonly used medication. However, doctors usually prescribe the following medications to patients with giardiasis:

As with any other illness, there are certain groups within the population that are at greater risk of contracting giardiasis.

Find out more: Chronic and Acute Diarrhea: Causes and Treatment

Giardiasis: What you need to know

Giardiasis is an illness with a variety of clinical presentations that spreads mostly in environments where hygiene is low. Therefore, it’s important to disinfect food properly and stay hydrated with properly treated water. This is especially important in warm climates, isolated from urban centers.

If you suspect gastrointestinal illness, it’s always best to seek medical attention. That way, your doctor can prescribe medication to make giardiasis go away in a few days.

What Are Germs and Where Are They Found?
Many people use the term "germ" when it comes to diseases, especially when explaining diseases to children. But do you know what microorganisms this term encompasses and where they are found? Read this article to find out! Read more »
Link copied!
Interesting Articles
Illnesses
What Are the Types of Cerebral Palsy?

Home tips
Ideas to Make a Wall Organizer for your Accessories

Having a tidy and organized house is the most practical way to enjoy your free time. The small details are…

Each spring, pollen allergies get dramatically worse. After a cold winter, plants and flowers come alive again and release pollen.…

Illnesses
What Are the Types of Cerebral Palsy?