The main complications of sternotomy are possible infections. If they're serious and evolve, they could become life threatening. 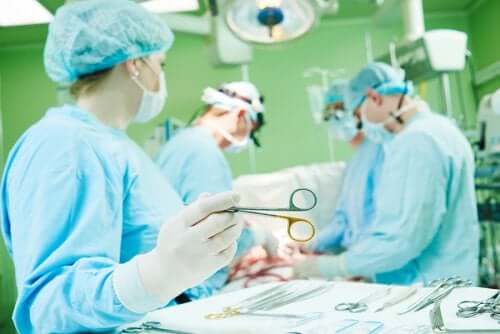 Currently, most heart surgeries are performed through a median sternotomy. This type of incision was first proposed in 1857 and became popular in 1957.

Overall, sternotomy complications are rare. However, when they occur, they’re usually very serious. The most common complications of this incision are infections and mediastinitis.

The most comprehensive study on sternotomy complications was conducted in parallel in the Karolinska Institute in Sweden, the University of Toronto in Canada, and Washington University in St. Louis, Missouri, United States. The researchers managed to establish most of the risk factors, which we’ll talk about in this article.

What Is a Sternotomy?

A sternotomy is a surgical incision that surgeons make along the sternum. They have used it for cardiothoracic surgery since the fifties. This is when it replaced bilateral anterolateral thoracotomy (the usual procedure at the time).

Overall, sternotomies became popular because they’re less painful than their predecessors. However, it soon became clear that they could lead to complications such as infections or wound dehiscence (the spontaneous opening of a wound).

A sternotomy is a surgical procedure in which a surgeon makes a vertical inline incision along the sternum. This allows access to the entire chest area, including the heart and lungs. It has several advantages, such as less postoperative pain, better access to pleural cavities, and greater protection of the shoulder muscles.

This article may interest you: 5 Foods that Seriously Hurt Your Heart

Overall, a sternotomy is a pretty safe procedure. However, sometimes it leads to complications.

One of the most common complications is infections, although they only affect about 3% of patients.

In this case, the infection may either be superficial or serious. However, the consequences in both cases can be severe. They generally result in hospital stays and can be life-threatening. Between 4% to 47% of patients who catch a sternotomy-related infection die.

Typically, the infection comes from sternal osteomyelitis or mediastinitis. On average, these complications manifest between 7 to 12 days after surgery. However, most patients develop them in the first week after surgery.

Mediastinitis, or the acute or chronic inflammation of the mediastinum (the tissues in the mid-chest), is the most serious complication. Mediastinitis comes from an infection and is very serious and sometimes fatal. It usually requires surgical treatment.

The main risk of this operation is possible infections.

The infections associated with sternotomy are related to three groups of factors.

Let’s take a look at them:

Discover: What is a Myocardial Infarction?

When risk factors are identified beforehand, recovery is typically successful. This can reduce the risk of complications and make them easier to deal with if they occur. Obesity, diabetes, and being older are risk factors that deserve special attention.

Post-sternotomy care includes cleaning the wound with mild soap and then drying it carefully. The sutures dissolve on their own after a few weeks. Wound closure strips, which are self-adhesive strips that facilitate healing, fall on their own or are removed by the patient after a week.

It’s normal for the patient to suffer from intermittent and episodic pain. If they do, they should take painkillers. It’s also normal for the incision to swell a little. After a couple of months, things should go back to normal.

What to Do When You Experience Chest Pain
If you've experienced moments of sudden chest pain, it is generally related to breathing problems, most often caused by shortness of breath. Read more »
Link copied!
Interesting Articles
Illnesses
The Symptoms and Treatment of Granuloma Annulare

Interesting Articles
Illnesses
The Symptoms and Treatment of Granuloma Annulare