What is a Myocardial Infarction?

Myocardial infarction is the death of the muscle fibers of the heart. This is a medical emergency of extreme gravity due to its high mortality rate 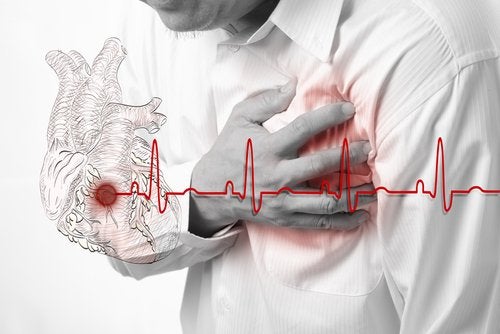 A Myocardial Infarction is a medical emergency of extreme gravity due to its high mortality rate. In addition, it’s one of the leading causes of death, along with cancer.

Myocardial infarction is the name given to the death of the muscle fibers of the heart.

Based on electrocardiogram findings, heart attacks can be classified into:

Naturally, this classification is very useful because it determines the initial therapeutic approach that the patient should receive by the medical staff.

Myocardial infarctions cause about 13 million deaths per year.

In general, it’s slightly more common in men than in women. It’s estimated that 1/6 men versus 1/7 women in Europe will die of a heart attack.

First of all, there are a number of factors that increase the risk of heart attack. Some of these are easy to correct, like harmful habits.

The most relevant are:

Did you know? Insomnia Increases the Risk of Stroke and Heart Attack

How Does a Heart Attack Occur?

Overall, the most common cause is coronary artery occlusion due to a thrombus. In most cases, it’s due to a buildup of fat in the arteries.

Although it’s rarer, in some cases the thrombus may be caused by excessive blood clotting. Other rare causes include: aortic dissection, congenital anomalies, and trauma.

How Can We Know That a Heart Attack is Occurring?

The symptoms of a heart attack are well known by all. Even so, to determine with certainty that there is a heart attack, a number of clinical requirements need to be met.

Visit this article: The 7 Signs of a Heart Attack that often Get Missed in Women

What are the Symptoms and Signs of a Heart Attack?

Heart attacks don’t always present themselves as chest pain. This may be the most common, but sometimes the clinical picture is different, especially in elderly and diabetic patients.

What do we Find in an Electrocardiogram of a Person who’s Having a Heart Attack?

The electrographic changes depend on the moment when it’s performed. In other words, the electrocardiogram changes as the heart attack evolves.

Still, the most characteristic elements are:

However, it’s possible to find patients with heart attack symptoms and a normal EKG. This should never be a reason to rule out a possible heart attack.

What are the Biochemical Markers?

Biochemical markers are molecules that can be detected in the blood. Their concentrations increase or decrease gradually in certain situations. Then, this is used for diagnostic purposes.

In the case of myocardial infarction, the markers that are employed are proteins that the muscle fibers release when they die. These proteins are:

Troponins are the only ones that are exclusively released in the heart cells. In addition, the two other proteins are released both by cardiac cells as well as the fibers of other muscles. That is the reason why troponins are the most specific markers for the diagnosis of a heart attack.

How is it Diagnosed?

Along with clinical history, it’s the most valuable tool. For a patient who may be suffering a heart attack, an EKG should be performed immediately.

In addition, doctors may use biochemical analyses and both invasive and non-invasive.

The cardiac ultrasound is the most valuable technique because it’s noninvasive and also relatively fast. However, as for invasive tests, the technique that offers better results is the coronary angiography.

The goals of treatment are the reduction of infarct size and the early diagnosis and treatment of possible complications.

The treatment of myocardial infarction should be immediate. Overall, 30% of patients die within the first hour, the most common cause being ventricular fibrillation.

Overall, this type of therapy is based on the recanalization of the blocked artery. The patient can best benefit from this therapy in the first 12 hours.

There are two ways to do it:

How to Survive a Heart Attack When Alone
Knowing how to respond to the symptoms of a heart attack when alone could be crucial to saving your life. Learn more in this article. Read more »
Link copied!
Interesting Articles
Illnesses
What are the Effects of Gluten on the Body?