Stents in Arteries: Everything you Need to Know

Stents are generally used to help with diseases related to coronary arteries. However, they can also be used for other vessels or conduits, such as ureters. 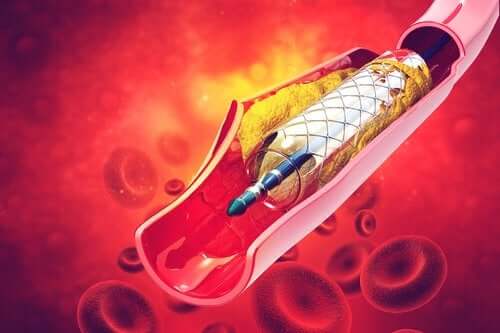 Stents are a device that doctors place in arteries and veins to help the body. They’ve revolutionized cardiac medicine, significantly improving the treatment and resolution of some illnesses. For example, stents are one of the main options for coronary artery obstruction.

A stent consists of a small tube that specialists place in a blood vessel, such as an artery or vein. It’s a self-expanding tube. So, when they place it, the aim is to dilate the obstructed or narrowed vessel.

The objective is to return the vessel to its normal state so that it can let blood pass correctly. Thus, in the case of an obstruction of the coronary arteries, which are the arteries that supply the heart, having a stent allows the heart to maintain the blood flow it needs to beat. What a medical breakthrough!

Stents in arteries were first used in the 1970s. Today, research is still underway to improve their effectiveness and reduce complications.

In this article, we’ll explain everything you need to know about stents.

As we’ve already mentioned, a stent is a small tube that’s placed in a blood vessel that is obstructed or narrowed. Once in place, this device expands, dilating the artery or vein, and allowing blood flow to flow normally.

Doctors place the stent through a surgical intervention called angioplasty. They perform this procedure by catheterization; that is, they insert a long, narrow tube called a catheter with the stent at the end.

However, doctors can use stents in many other diseases besides coronary artery disease. For example, they can use it to dilate other conduits, such as the ureters. It’s also useful in illnesses such as aneurysms or narrowing of other arteries, such as the renal artery.

What types of stents in arteries are there?

As the years have gone by, the advances in this field have been remarkable. Doctors made the first stent, which today is called a conventional stent, of metal. At the time, they typically used stainless steel or chrome.

The conventional stent is quite effective, as well as being the most economical of all types. The problem with this type of stent was that the vessel could eventually clog again.

This led to the development of drug-eluting stents, which consist of placing a drug on the stent material itself to prevent the vessel from clogging again. It’s more expensive than the previous one, but reduces the need to take medication after the intervention.

Lastly, there are bioabsorbable stents. They’re like drug-eluting stents, with the improvement that the material can be reabsorbed. In other words, our body can degrade it and make it disappear.

You may be interested in: Spontaneous Coronary Artery Dissection (SCAD)

What should I know about stents in arteries?

It’s important to know that, although the stent is a great advance in cardiology, it also has its risks and complications. It’s usually placed to resolve the obstruction of the coronary arteries, which is closely related to atherosclerosis.

Atherosclerosis is a disease in which accumulations of fat are deposited inside the arteries. Studies relate this illness to high cholesterol levels, hypertension, and smoking.

Therefore, it’s essential to know that placing stents in arteries and veins doesn’t cure the disease. It’s a one-time solution to reduce a specific obstruction. However, we must prevent further obstructions in other blood vessels.

Also, after the intervention, specialists usually impose medical treatment to prevent thrombi or clots from occurring in the area where the stent is placed. In any case, the physician must choose the most effective treatment in each particular case.

Discover How Stress Affects the Heart
Eevidence shows that emotional stress influences a wide variety of diseases. With that in mind, we'll look at how stress affects the heart. Read more »
Link copied!
Interesting Articles
Treatments
Advantages and Disadvantages of LASIK Surgery