Cinnamon is an excellent gardening ally when it comes to protecting plants from pests and plagues. Not only does it have antifungal qualities but also because it provides many nutrients to the soil.  As if that wasn't enough, the strong scent it emanates keeps pests away. Have you heard about the cinnamon benefits on plants? 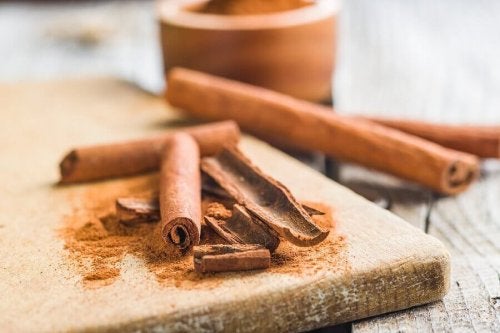 Cinnamon has been used for thousands of years in both gastronomy and natural medicine. However, few of us know that it’s also an excellent ally that keeps garden plants healthy without the need to use harmful chemicals. Find out below some of the cinnamon benefits on plants.

Although there are currently fertilizers and pesticides that help keep a garden in top shape, many have chosen to start using cinnamon as a substitute. Not only is it cheaper than conventional, commercial options, but it’s also 100% eco-friendly and safe.

Also, the best part is it will solve several problems, and as consequence, you won’t have to use specific ones for each problem.

Keep reading to find out in detail how you can turn these cinnamon benefits into your best gardening weapon.

Cinnamon powder has interesting applications in gardening. While we’ve all become used to keeping it exclusively in the kitchen, it’s actually very versatile in many other household tasks.

Do you want to keep the plants in your garden healthy? Find out below how you can use it.

Instead of purchasing expensive, toxic chemical pesticides for your garden, use a little bit of cinnamon powder. Due to its penetrating aroma and properties, this ingredient keeps mosquitoes away from you, and pests away from feasting on your plants.

To keep garden plants healthy, it’s essential to have a product that prevents fungi. Fortunately, thanks to its anti-fungal and disinfectant compounds, cinnamon can protect plants against these microorganisms.

Read also: 8 Organic Ways to Get Rid of Ants

No one wants their vegetables to develop diseases, especially when they’re still growing. The problem is that soil conditions and the proliferation of fungi can attack at any time. However, wonderful cinnamon can be used as a fertilizer option.

Currently, there are several commercial products for promoting rooting in cuttings successfully. You don’t have to spend money on them, however, just try this simple trick: apply cinnamon to the stem of the cutting before planting it.

If there are gardening problems that prevent you from getting a good result, another option is to make a fungicide recipe by combining cinnamon with aspirin.

Surely you’ll be interested: Houseplants That Will Make You Healthier

5. Heal the wounds on your plants

After excessive pruning, plants may suffer cuts or wounds that tend to be infested with fungi and other harmful microorganisms. Fortunately, to prevent this problem, you can give them a protective layer of cinnamon.

Of course, cinnamon can also be used as an alternative to keep indoor plants healthy. Thanks to its properties and nutrients, it can prevent them from withering or from getting sick. In addition, it also prevents aphids.

As you can see, cinnamon has interesting benefits for keeping garden plants healthy. If you haven’t tried it yet, use it to replace those toxic chemicals that are so harmful to the environment.

Four Ways to Decorate Your Small Garden
There are plenty of ways to get the most out of a small garden just by adding a few small details. It all depends on your style.  Read more »
Link copied!
Interesting Articles
Garden and outdoor spaces
Types of Basil You Can Grow in Your Garden

The spread of plant pests and diseases has increased in recent years and, in fact, has reached epidemic proportions. Although it's a problem that's receiving more and more attention, not…

Would you like to learn how to make some beautiful exterior lanterns to decorate your yard? The lighting in this part…