Some studies reveal there's a genetic factor behind the causes of scalp psoriasis. 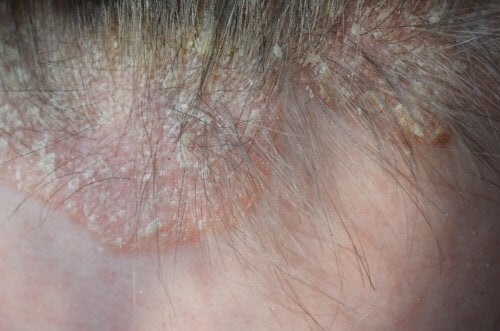 Scalp psoriasis is a chronic recurrent inflammatory type of dermatosis. One of its characteristics is the presence of delimited erythematous plaques with white flaking. The scaly skin is usually in the flexor areas of the limbs and on the scalp.

It’s a disease of great clinical variability and for this reason, it depends on various factors.

Some studies demonstrate the prevalence of psoriasis in the relatives of those affected by it. However, the development of cellular immunology indicates the involvement of leukocytes in the pathogenesis of the disease.

There are several factors related to the onset of an outbreak, particularly in genetically predisposed people. These factors include:

Also, any type of skin irritation can cause the appearance of psoriatic lesions. Likewise, stimulation such as scratching or pressure on clothing can cause or aggravate existing injuries.

Among the ones that can trigger or aggravate psoriasis are lithium salts, beta-blockers, antimalarials, and the abrupt suspension of corticosteroid treatments.

You may also be interested in: Five Herbal Topical Psoriasis Treatments

Overweight is another important factor to consider. In fact, the relationship between psoriasis and weight is bidirectional as excess weight predisposes to psoriasis and psoriasis promotes obesity. In addition, chronic smoking disrupts many inflammatory processes, including the immune response.

There’s a relationship between group A beta-hemolytic streptococcal infection and a first psoriasis outbreak. Especially when the outbreak appears in the oropharynx.

This condition has a wide range of symptoms. There’s much variability among people who suffer from it, even in the same person.

Its appearance can manifest from papules to scaly patches. However, they generally don’t lead to hair loss. They most frequently appear in the occipital region and the forehead.

Itchiness is not a characteristic symptom. However, picking on the patches can lead to bleeding. The diagnosis of scalp psoriasis is based on the presence of erythematous plaques with scales.

Dermatologists use morphological criteria to assess the severity of psoriasis. Specifically, the psoriasis area and severity index. The latter allows them to measure the extent of the lesions, the degree of erythema, and scales.

Scalp psoriasis is a chronic disease though, so the goal of treatment is mainly to control its intensity. However, scaling in this area is frequent and also hard to treat.

Firstly, let’s say that topical treatment is the basic pillar of treatment for this condition. In addition, the classic treatments include:

Systemic treatment of psoriasis on the scalp

Dermatologists reserve these for cases where topical treatment fails to make a difference and the prescribed drugs include:

Foods that Can Help Control Psoriasis
Did you know that some foods can help control psoriasis symptoms? Read this article to find out which foods you should eat to help with your psoriasis. Read more »
Link copied!
Interesting Articles
Illnesses
Taking Care of a Common Cold at Home

In most cases, taking care of a common cold at home is quite simple. This condition can affect anyone and…

Illnesses
What Are the Types of Cerebral Palsy?

Interesting Articles
Diet
What is the Carnivore Diet?